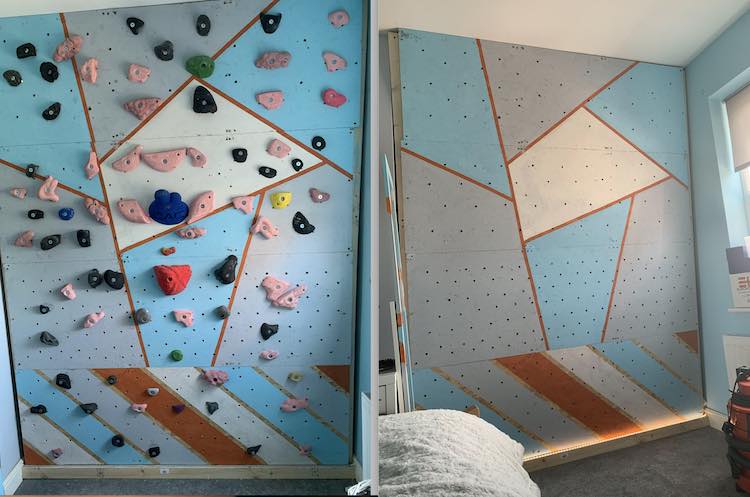 Rather than twiddle her thumbs in quarantine, this bored 15-year-old girl recently turned one of her bedroom walls into a proper 8-foot climbing wall—and it only took her one week.

Erin Sloan says she was inspired to build the structure after the North West Face Climbing Centre—which is where she has been climbing for the past four years and working as an instructor—was closed due to COVID-19.

Although Erin finished the project last week, she says that it could have been done in a single day if she had not been forced to wait for extra materials.

“I just shut my door, put my music in and started drilling. I was very proud when it was done,” said the teenager from Winsford, Cheshire. “The first thing I did was call my dad to tell him and show him pictures. He was really proud.

CHECK OUT: 16-Year-Old Has Been Using His Flying Lessons to Deliver Medical Supplies to Rural Hospitals Fighting COVID

“I showed it off to my friend who is also looking at building one who went ‘I can’t believe you have done it!’ I just said ‘Well I have so you’d better believe it!’

“I would not say there was anything too difficult, but I am not the tallest person, so getting the boards on with a major drill in your hands was not the easiest part—but I did it in the end!” she added. “Mum was not skeptical. She knew I could do it.”

The driven teenager says that she hopes her talent for climbing will help to smash gender-stereotypes in the sport.

“I am a girl and climbing is not a female-dominated sport. That is something that drew me to do this,” said Erin.

She worked for roughly eight hours for the first two days of building, starting as early as 7AM. In addition to her dad gathering all the necessary supplies together, she said was also lucky enough to have been given some supplies from her boss before the climbing center closed.

“I wanted to do it as fast as I could to be training again. It had been about three weeks before I had gone onto a climbing board.

“I hadn’t had any major building experience. It is something I have always wanted to do, but maybe when I had my own place.

“For the base at the top and bottom, I had to seal in some wooden batons. I screwed those in and screwed the bottom board in so the wall could sit on something that was not my carpet,” she continued. “Then I got the board, painted the board and drilled the holes, put the metal things in the back, put the boards up and screwed into the wall.”

When it was completed, Erin says her 9-year-old Labrador could not understand where he was.

“He walked into my room, saw my wall and thought he was in the wrong house,” Erin said.

Before the novel coronavirus outbreaks hit, she would train about 80 hours a week on and off the wall, with the off-wall training involving plenty of cardiovascular activities like running and cycling.

“I am quite sad it is closed because the wall is a family. It is a home away from home. I spend more time at the climbing centre!” said Erin. “It is a big part of my life I am not able to go to. That is what made me do the wall. I could have a home away from a home.”