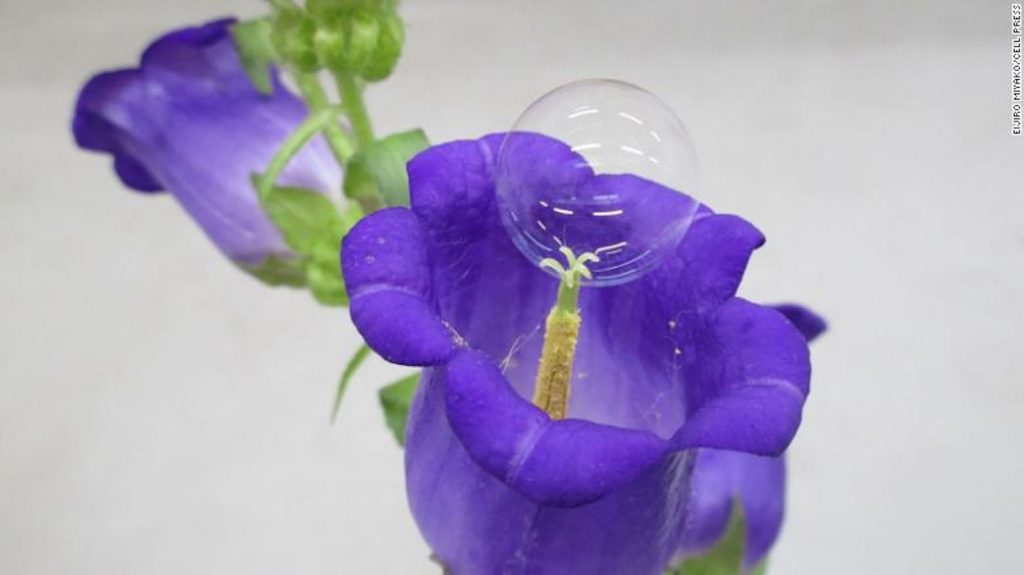 Even though bees had a ‘very good year,’ with the second smallest winter hive loss in 14 Years, according to an annual survey released in March, agriculture experts continue to look for alternative pollination techniques.

Bees and other pollinators like butterflies are essential to farmers who grow flowering crops like fruit orchards and almonds, but with bee populations suffering over the last decade, due to a variety of factors, one innovative researcher in Japan may have found the perfect solution—and the idea came to him while in the park blowing soap bubbles with his son.

Eijiro Miyako, an associate professor at the Japan Advanced Institute of Science and Technology has successfully used soapy bubbles to pollinate a pear orchard by delivering pollen grains to targeted flowers in the most delicate way, utilizing a drone.

The whimsical technique would be much cheaper and more effective than other types of manual pollination, when used in concert with robotic or drone delivery methods.

The study, published in Nomi, Japan on June 17 in the journal iScience, presents a low-tech complement to robotic pollination technology designed to supplement the work of vanishing bees.

“It sounds somewhat like fantasy, but the functional soap bubble allows effective pollination and assures that the quality of fruits is the same as with conventional hand pollination,” wrote Miyako, the senior author.

“Soap bubbles have innovative potentiality and unique properties, such as effective and convenient delivery of pollen grains to targeted flowers and high flexibility to avoid damaging them.”

Miyako and colleagues had previously published a study in the journal Chem, in which they used a tiny toy drone to pollinate blossoming flowers. But, even though the drone was only two centimeters long, the researchers struggled to prevent it from destroying the flowers as it bumped into them.

While searching for a more flower-friendly artificial pollination technique, Miyako spent a day at the park blowing bubbles with his son. When one of the bubbles collided against his son’s face — a predictably injury-free accident — Miyako found his inspiration.

After confirming through optical microscopy that soap bubbles could, in fact, carry pollen grains, Miyako and Xi Yang, his coauthor on the study, tested the effects of five commercially available surfactants on pollen activity and bubble formation. The neutralized surfactant lauramidopropyl betain (A-20AB) won out over its competitors, facilitating better pollen germination and growth of the tube that develops from each pollen grain after it is deposited on a flower.

Based on a laboratory analysis of the most effective soap concentrations, the researchers tested the performance of pear pollen grains in a 0.4% A-20AB soap bubble solution with an optimized pH and added calcium and other ions to support germination. After three hours of pollination, the pollen activity mediated through the soap bubbles, remaining steady, while other methods such as pollination through powder or solution became less effective.

Miyako and Yang then loaded the solution into a bubble gun and released pollen-loaded bubbles into a pear orchard, finding that the technique distributed pollen grains (about 2,000 per bubble) to the flowers they targeted, producing fruit that demonstrated the pollination’s success.

Finally, the researchers loaded an autonomous, GPS-controlled drone, which they used to direct soap bubbles at fake lilies (since flowers were no longer in bloom) from a height of two meters, hitting their targets at a 90% success rate when the machine moved at a velocity of two meters per second.

RELATED: You Can Now Use These Pocket-Sized ‘Bee Savior’ Cards to Rescue Hungry Honeybees on the Sidewalk

Although this approach to pollination appears promising, more techniques are still needed to improve its precision. Plus, with soap bubbles, weather is key — raindrops can wash away pollen-bearing bubbles from flowers, while strong winds might blow them astray.

Next, Miyako and colleagues plan to tackle the issue of waste generated by the artificial pollinator prototype, since most bubbles still fail to land on their target flowers.

SHARE the Buzz With Your Bee-Loving Friends on Social Media…