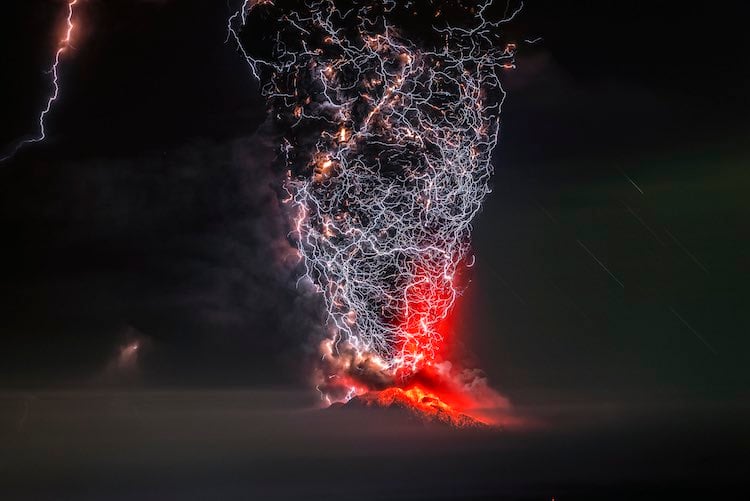 This stunning image captures the moment an incredible lightning storm was created during a violent volcanic eruption.

The striking photo of the Calbuco volcano—regarded as the one of the most dangerous in Chile—won the Grand Prize in the inaugural “The Perfect Moment” photography competition, presented by photography contest business Our World In Focus.

The rare “dirty storm” phenomenon occurs when the force of the elements thrown from the bottom of the volcano collide with the outside, causing positive and negative charges to produce lightning.

LOOK: These Photographers Captured Some of the Most Dazzling Pictures of Mother Earth’s Landscapes

The first prize image won photographer Francisco Negroni a $2,000 cash prize, as well as a new camera lens, and a $200 voucher to spend at a camera equipment store.

The contest’s judges, Max Rive of the Netherlands and John Weatherby of the USA, called the photo “truly spectacular”.

“This image shows a rare moment of the eruption of the Volcano Calbuco with truly spectacular forces of nature that make you stare at the image for some time,” said Rive. “It is the combination of the rarity of this natural phenomenon with the technical quality of the image that makes it so powerful and unique.

“This image left the biggest impression on me and couldn’t fit the subject ‘Perfect Moment’ any better.”

Bence Mate, the second-place winner for the competition, won $500 in cash and $100 in vouchers for his photo entry, “Eye To Eye”.

The fascinating photo shows a green-crowned hummingbird hovering in mid-air, eye-to-eye with a small, green pit viper which is dangling by its tail from a branch.

The on-guard hummingbird, photographed with its wings beating rapidly, squared off against the viper in order to protect its nesting young by making squawking sounds and dancing around the snake in mid-air.

LOOK: After Years of Gaining Trust of Local Squirrels, Photographer Has Captured the Most Wholesome Pictures

“Images of wildlife often make for strong storytelling photography, especially when a potential confrontation is photographed, as in this image captured between a hummingbird and a viper,” remarked Rive.

“The perfect technical quality in terms of sharpness, focus, contrast and the chosen shutter speed, which makes the movement of the wings visible, also helps with bringing this image to life.”

The contest’s fifth place winner of $100 cash, was Eliseo Nicolaevici’s sweet photo of a little lamb crossing a rickety wooden bridge, followed by a herd of more than nine sheep.

“This image shows how an ‘ordinary moment’ can be made very powerful and evocative by capturing it at the right time and place,” says Rive. “Elements that impressed me are the story, of how the lamb walks in front of the adult sheep.

“The photo also creates a form of tunnel vision and framing with the hang-bridge, and how all the faces of the sheep are lined up in a straight line.”

Meanwhile, competition finalist Hasan Baglar submitted an amusing photograph of two praying mantises perched on a branch, their front legs stretched up in the air, and their colorful wings outspread.

Other runner-up finalists for the competition include photos depicting a lizard and a snail kissing in Indonesia and a friendly whale shark swimming underneath a fishing boat.

The two judges for the competition paid homage to all the photo submissions, saying: “We want to thank all of the entrants to this year’s contest. It has been an honor to witness each of your own Perfect Moments.”