Happy 90th Birthday to actor–director Clint Eastwood who starred in Hollywood Westerns and cop films like Dirty Harry that simply defined the word ‘cool’. He went on to write and direct some of the most acclaimed films of the 21st century—like, Unforgiven, Million Dollar Baby, and Gran Torino—all while in his 70s and 80s. For the first two, Eastwood won Oscars for Best Director and Best Picture, as well as nominations for Best Actor. He also served as Mayor of the California city, Carmel-by-the-Sea.

Retired from acting, he churned out nine films in his 80s, and has expressed no desire to retire now. His 34-year-old actor son Scott said of his birthday, “We’re just going to do a family thing—very, very calm, very mellow.”

His greatest commercial success was the comedy Every Which Way But Loose (1978) and its sequel, but he also directed the mystery drama Mystic River and the war film Letters from Iwo Jima (for which he received Academy Award nominations), the drama Changeling (2008), and the sports drama Invictus (2009). The biopic American Sniper (2014) set box-office records for the largest January release ever and was also the largest opening ever for an Eastwood film. WATCH his newest trailer from November… (1930)

Six moths ago, he premiered his latest film Richard Jewell, depicting the Olympic Park bombing in Atlanta, when the security guard who found the bomb was later accused of the crime. It starred Sam Rockwell, Jon Hamm, and Kathy Bates, who earned an Oscar nominations for the film. 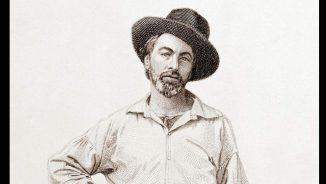 Also, on this day in 1819, Walt Whitman, one of America’s greatest poets, was born in New York. He published his seminal collection, Leaves of Grass, when he was 37 years old, which challenged the definition of poetry, and forever changed its form and function.

Published in 1855 with his own money, Leaves of Grass was an attempt at reaching out to the common person with an American epic. It was considered obscene at the time, but by the end of his life was recognized as a masterpiece. He also wrote, “O Captain! My Captain!,” a 1865 poem about the death of Abraham Lincoln. WATCH a short bio below… and see 10 mementos of his life in the N.Y. Times.