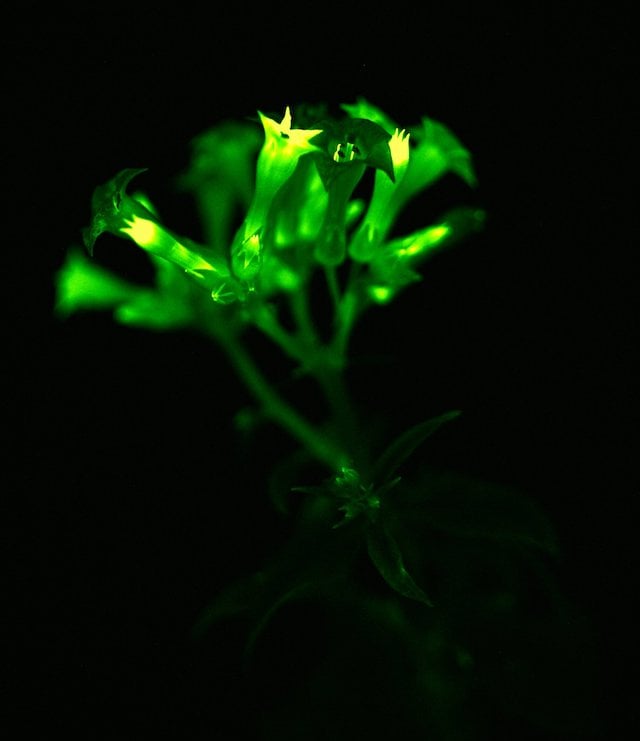 Although glowing plants may seem like a work of science fiction, researchers have succeeded in creating plants that produce their own visible luminescence—and they say the possibilities for how we can use these plants are endless.

This week in Nature Biotechnology, the scientists revealed that bioluminescence found in some mushrooms is metabolically similar to the natural processes common among plants. By inserting DNA obtained from the mushroom, the scientists were able to create plants that glow much brighter than previously possible.

This biological light can be used by scientists for observing the inner workings of plants. In contrast to other commonly used forms of bioluminescence, such as from fireflies, unique chemical reagents are not necessary for sustaining mushroom bioluminescence—in other words, plants containing the mushroom DNA glow continuously throughout their lifecycle, from seedling to maturity.

RELATED: Scientists Discover a Complete Protein Found Nowhere on Earth That Fell From Space, May Hint at Planet’s Origin

The breakthrough is similar to a project launched by MIT scientists in 2017, which used nanoparticle infusions to turn the plant’s stored energy into light, although the glow only lasted for about four hours at a time. The researchers later used their glowing plants for an art exhibit exploring the possibilities of integrating the plants into modern eco-friendly architecture.

“Lighting right now consumes a vast portion of our energy demand, approaching close to 20% of our global energy consumption, generating two gigatons of carbon dioxide per year,” says Michael Strano, the Carbon P. Dubbs Professor of Chemical Engineering at MIT. “Consider that the plants replace more than just the lamp on your desk. There’s an enormous energy footprint that could potentially be replaced by the light-emitting plant.”

The plants described in this week’s discovery can also be used for practical and aesthetic purposes, most notably for creating glowing flowers and other ornamental plants—and while replacing street lights with glowing trees may prove fantastical, the plants produce a pleasant green aura that emanates from their living energy.

According to the authors, the plants can produce over a billion photons per minute.

The report in Nature Biotechnology was authored by 27 scientists, led by Drs. Karen Sarkisyan and Ilia Yampolsky. The research was carried out principally through a collaboration between Planta, a biotech startup in Moscow, the Institute of Bioorganic Chemistry of the Russian Academy of Sciences, MRC London Institute of Medical Sciences, and the Institute of Science and Technology Austria.

Light Bio is a new company that plans to commercialize this novel technology in ornamental house plants in partnership with Planta. Light Bio CEO Dr. Keith Wood stated: “Thirty years ago, I helped to create the first luminescent plant using a gene from fireflies. These new plants can produce a much brighter and more steady glow, which is fully embodied within their genetic code.”

However, designing new biological features is more complex than merely moving genetic parts from one organism to another. Like gears in a watch, the newly-added parts must metabolically integrate within the host. For most organisms, the parts needed for bioluminescence are not all known. Until recently, a complete part list was available only for bacterial bioluminescence—but past attempts to create glowing plants from these parts have not gone well, largely because bacterial parts typically do not work properly in more complex organisms.

Little more than a year ago, scientists uncovered the parts that sustain bioluminescence in mushrooms. For the first time, the living light of an advanced multicellular organism was fully defined.

In the present report, the authors disclose that mushroom bioluminescence works particularly well in plants. This allowed them to make glowing plants that are at least ten-fold brighter. Using ordinary cameras and smartphones, green illumination was recorded coming from leaves, stems, roots, and flowers. Moreover, the sustained light production was achieved without harming the health of the plants.

WATCH: ‘Unprecedented’ New Photos of the Sun’s Surface Are Being Hailed as Landmark Achievement for Science

Although mushrooms are not closely related to plants, their light emission centers on an organic molecule that is also needed in plants for making cell walls. This molecule, called caffeic acid, produces light through a metabolic cycle involving four enzymes. Two enzymes convert the caffeic acid into a luminescent precursor, which is then oxidized by a third enzyme to produce a photon. The last enzyme converts the oxidized molecule back to caffeic acid to start the cycle again.

In plants, caffeic acid is a building block of lignin, which helps provide mechanical strength to the cell walls. It is thus part of the lignocellulose biomass of plants, which is the most abundant renewable resource on Earth.

As a key component of plant metabolism, caffeic acid is also integral to many other essential compounds involved in colors, fragrances, antioxidants, and so forth. Despite their similar sounding names, caffeic acid is not related to caffeine.

MORE: Scientists Use Recycled Sewage Water to Grow 500-Acre Forest in the Middle of Egyptian Desert

By connecting light production to this pivotal molecule, the glow emitted by the plants provides an internal metabolic indicator. It can reveal the physiological status of the plants and their responses to the environment. For instance, the glow increases dramatically when a ripe banana skin is placed nearby (which emits ethylene). Younger parts of the plants tend to glow most brightly and the flowers are particularly luminous. Flickering patterns or waves of light are often visible, revealing active behaviors within the plants that normally would be hidden.

In this published research, the authors relied on tobacco plants because of their simple genetics and rapid growth—but the benefits of mushroom bioluminescence are broadly fitting to plants. Research at Planta, and by Arjun Khakhar and colleagues, have demonstrated feasibility for other glowing plants, including periwinkle, petunia, and rose.

Even brighter plants can be expected with further development. New features may be possible, such as changing brightness or color in response to people and surroundings. Through this living aura, we may even gain a new awareness of our plants that emulate the inspiring allure of Avatar.