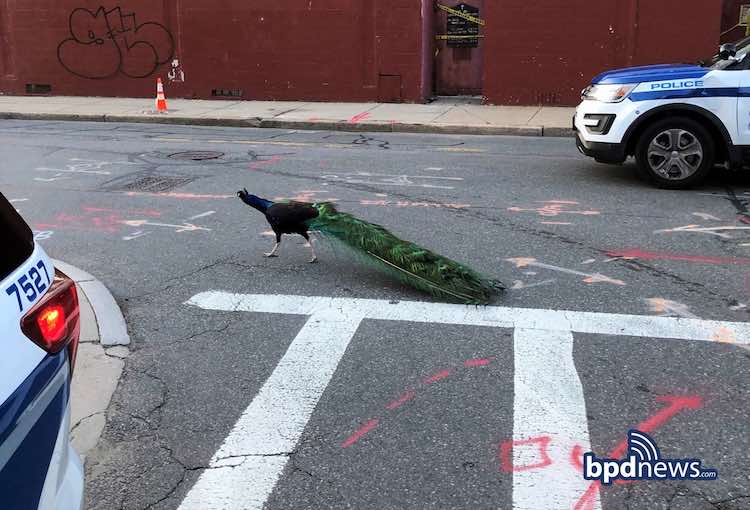 A rogue peacock who was found wandering the streets of Boston has safely been returned home thanks to a police officer’s brilliant rescue strategy.

A team of Boston Police Department officers had reportedly been patrolling the Roxbury district last week when they were approached by a concerned citizen who said that an animal may have escaped from the nearby Franklin Park Zoo.

Upon tracking down the runaway critter, the officers “arrived at the scene and were met by an extremely large, slightly intimidating, and quite beautiful, male peacock,” the police department wrote in a statement.

“The peacocks at Franklin Park Zoo are free-roaming, and while they typically wander throughout the zoo, it is currently mating season, and it’s possible he ventured out looking for love in search of a peahen (female peacock),” a zoo spokeswoman told CNN.

WATCH: This Hacker Built a Vending Machine for Crows as an Ingenious Response to a Cocktail Party Argument

Thankfully, one of the officers managed to find and download a bird-calling app on his phone so he could play a peacock mating call through his speakers—and his scheme worked.

The officers successfully lured the bird into a fenced-in yard so they could keep it in check until animal control arrived to transport it back to the zoo.

“Upon learning of the peacock’s adventure, our animal care team at the zoo worked quickly with the Boston Police Department and Animal Control to recover the peacock, and we’re happy to report he is now back at the zoo and doing well,” the zoo spokeswoman told the news outlet.

Birds Of A Feather Flock Together; So Be Sure And Share This With Your Friends On Social Media…