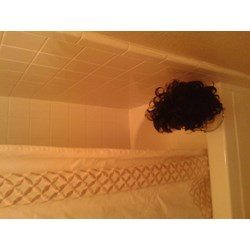 Last night I watched the 1970’s T.V. show called Sanford and Son. The episode was about Fred (played by the late great comedian Red Foxx) getting ready for a date with a younger woman. In this episode Fred put on a black colored wig made for men to wear.
To continue, Fred’s son Lamont (played by Demond Wilson) told him that it looked like he (Fred) “had on a Brillo pad.” Further, watching this episode caused me to start thinking. It has been years since I have seen a man wearing a toupe. Judging by what I have seen in the past, it must have been extremely difficult getting the right toupe for the right hair texture (i.e. from caucasian thin and fine, thick and fine, wavy, curly, to thin and nappy, thick and nappy, etc.).
This includes color choices as well. I have even seen a toupe come off a man’s head in church services. To me, a man wearing a wig sounds interesting. I don’t know what it is about wigs, but back in the late 1980’s and 90’s there were a number of wig snatching incidents where I lived.
It seemed as if people had an “itch” to snatch a person’s wigg off their head. As a result, a few fights started. Further, if this happened to men, I can understand why it has been the “in” thing for years to wear hair weaves and transplants.
Yes, this is directed towards you men out there! “You guys” actually do wear hair weaves, too. I’m talking about the kind that makes your hair look like yours, totally. This method is done at the Hair Club For Men centers and other places. I knew two people who went there. This one person in particular also brought two other people in.
One of the others was there for support. The consultation began and everything seemed to be going swell. After that, before photos were taken of the bald parts of the scalp. Once digital copies were shown to the two possible clients, the main person who needed the help (Patches) decided to share their before photos to the supportive party. The person there who came to be supportive came unglued.
Both pending clients were surprised. It was comedy hour for the supportive party. Furthermore, even though it turned into comedy hour, the most bald of the two prospective clients named Patches remained composed and looked forward to getting their hair looking good (with a full head of hair).
After that prices and payment options were mentioned. Everything was fine and dandy until the individual with the big money was not able to purchase the platinum package. So, as an option the person with all the clout and Patches had to make a decision concerning how both their hair could get done as many times as necessary throughout the year. The one with all the clout asked Patches to chip in a small amount for at least the gold package deal.
The situation turned into a “no-go”. Patches decided not to return to the Hair Club For Men because of wanting a “free ride” all the way. Patches didn’t want to chip in at all! As a result, Patches remains bald to this day. Their hair looks like the back of Red Foxx’s head now. The only difference is that their hair is longer in the front. On a good day a wig is worn.
In public (when no one is looking) they pull it off and put a ball cap on because they said it gets too hot wearing a wig. The interesting part about this is the fact that when a person becomes a client of The Hair Club For Men, they have to have a shaved head, anyway (for the glued hair to look as natural as possible).
Well, men. It remains your choice to wear a wig or not. If you do, hopefully people will give you the respect to not snatch your wig or toupe off. Last but not least, here is one pointer: If you know or have someone go with you on hair loss consultations for moral support, try to make sure they are not the type of person that makes you feel ashamed for who you are, what you are, and your imperfections.