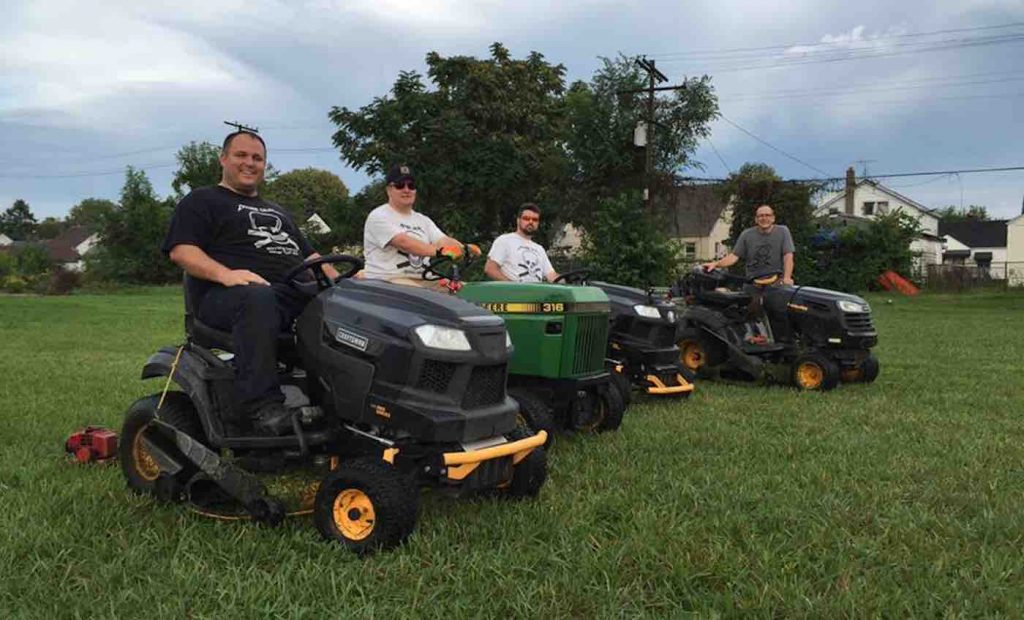 If someone approached you with a giant wrestling-style leather and gold belt slung over their shoulder that said “Grand Champion – Motown Mowdown” you’d be forgiven for mistaking them for some sort of amateur prize fighter or professional wrestler.

This Grand Champion belt is awarded to whichever volunteer mows the most grass on Detroit’s public playgrounds and parks in a 12-hour competition called the Motown Mowdown.

The Detroit Mower Gang—a group of volunteer grass cutters and playground repairmen—began their annual mow-a-thon on May 16th at the Hammerberg Playfield, an abandoned collection of sports fields, swing sets, and meadows on the city’s west side.

LOOK: Photos of 75-Year-Old Volunteer Napping With Cats Hauls in Funds to Run Sanctuary for a Year

“No one owns this particular park, it just fell through the cracks,” Tom Nardone of Birmingham told Detroit News.

50-year old Nardone, who started the Detroit Mower Gang in 2009, added: “We just try to keep it alive … Without a group, you couldn’t mow this park with a mower in (fewer than) a couple of days.”

A Man and his Mower

A decade ago the city was close to filing for bankruptcy, and city hall announced that, of the 300 parks in Detroit, they only had funding to care for 72 of them. That year, Nardone purchased a lawn tractor on Craigslist and took it to a park on 8-Mile road. He started a Facebook Group to see if any neighbors would volunteer their time to help mow with him—and the rest is heartwarming history.

At Hammerberg Playfield last Saturday, gang members repaired broken swing sets and mowed the derelict fields before splitting up to tackle 10 other abandoned playgrounds and parks.

28-year-old Hannah VanEckoute, the reigning, defending, undisputed Motown Mowdown Champion of the World, arrived with her Dixie Chopper with her husband Gage for their fourth year with the gang.

“The reaction from people when they see what we’ve done is always so special,” said VanEckoute. “Sometimes the grass is so tall kids can’t even get into it and then the smile on their faces as we leave is such a great accomplishment.”

The work of the Detroit Mower Gang has allowed the city to slowly catch up to its park workload. Last year they formed a nonprofit called Enemies of Debris and hosted a “trash fishing” event where volunteers pulled trash out of the Detroit River with their fishing rods. As hard as he works, it’s Nardone’s hope that city hall will one day put him and his gang out of business.

“We could start a bowling league or something,” he joked.