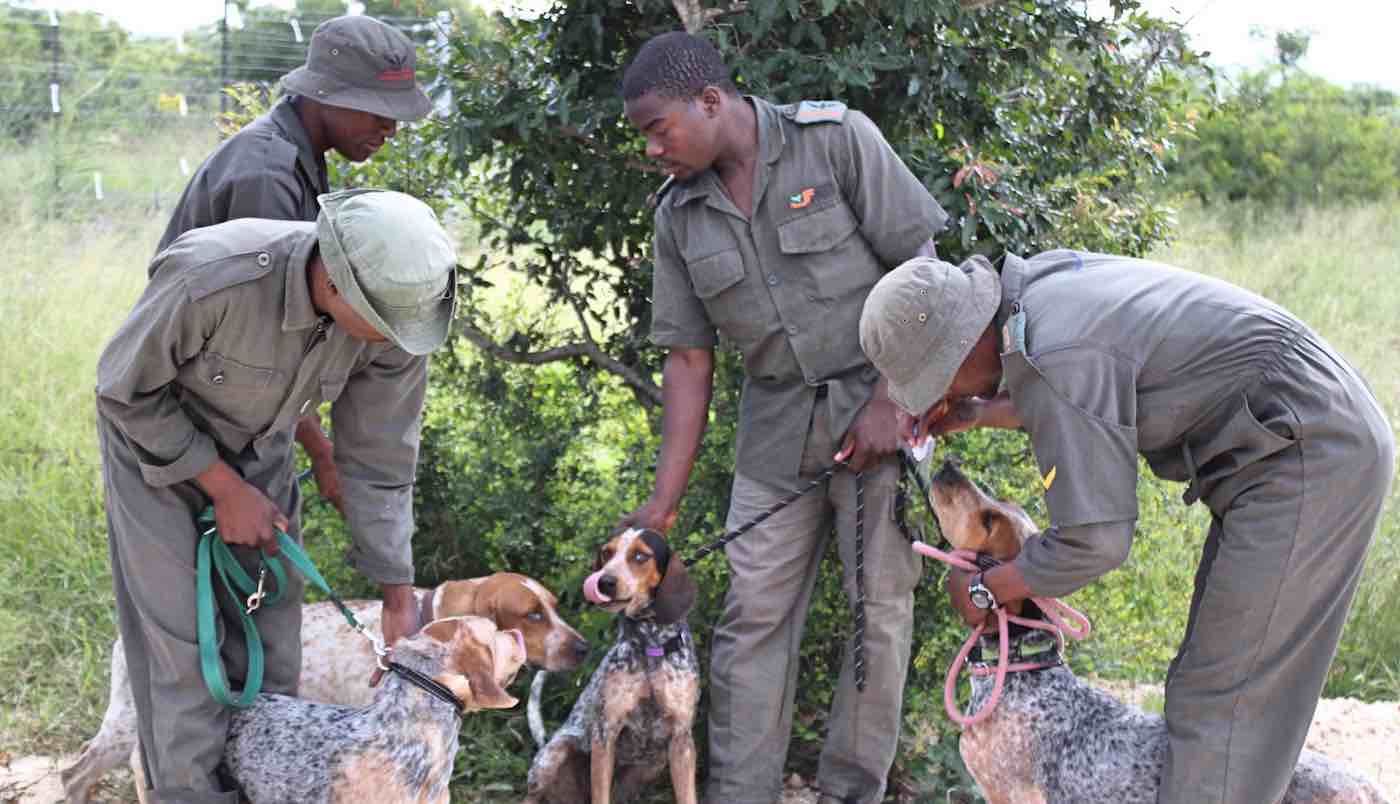 Everybody knows that dogs are man’s best friend—but these trusty canines in South Africa have also proven themselves to be the best friends of endangered wildlife as well.

The pack of beagles, bloodhoods, and more, has saved the lives of 45 rhinos threatened by poachers since 2018. Now, in the midst of the coronavirus lockdown, they and their human friends at the Southern African Wildlife College continue to provide their essential services in the country’s national parks.

Trained to protect wildlife since birth, these hounds began their important work at the age of 18 months. Their efforts have helped law enforcement in the region of Kruger National Park catch an “unprecedented 145 poachers and confiscate 53 guns,” according to National Geographic.

But what is now a well-oiled wildlife protection operation did not start out that way; the story began in 2017, when Theresa Sowry, CEO of the Southern Africa Wildlife College, visited a man named Joe Braman at his rural ranch in Southern Texas.

RELATED: Humpback Whale Population Bounces Back From Near-Extinction—From Just 450, to Over 25,000

Braman was a part-time police officer, businessman, and cowboy with no knowledge of the poaching crisis happening half a world a way—but Sowry had heard through the grapevine that Braman trained a special bloodline of dogs that had found great success in helping Texas law enforcement catch escaping prison inmates. She wanted to see for herself whether the pooches could be of help at the southern tip of her continent.

“Just think about it,” Braman mused to NatGeo. “If you spun a globe and threw a dart and it stuck, what’s the odds you’ll find a low-key guy in southern Texas’s coastal bend gettin’ picked to stop the extinction of a species?”

South African National Parks had previously employed anti-poaching teams using individual dogs, but their success was limited. “Kruger was very keen to test free-running dogs,” Sowry explained to the news outlet. “Building a pack dog team is a massive undertaking. You need the right genetics, the right training, and, most importantly, the right mind-set to bring it all together.”

Braman grew up raising just these types of dogs with his dad; the father and son team would train groups of 15 or so dogs to follow the scent of animals.

When Braman arrived in South Africa, the plan was simply to asses Kruger National Park’s K9 unit and to train a handful of dogs—but the project quickly expanded to reach a scale that nobody anticipated. After finding that training practices in the country were much different that what he did on his ranch back home, he returned to Texas to train a group of dogs which he could later bring back to Kruger.

CHECK OUT: India Gets Its First Ever Hospital for Abused Elephants – and They’ve Already Treated Dozens

Upon returning with his dogs, Braman didn’t know what to expect—but almost immediately after arriving at the park, the canines managed to catch a group of poachers who had killed a rhino. Since then, there has been a ten-fold increase in successful apprehensions of poachers thanks to the work of the K9 program.

In the midst of the COVID-19 pandemic, the work of the K9 team continues in earnest. On May 7th, the Southern African Wildlife College celebrated the first birthday of the black and tan hound puppies, born from the original dogs that came from Texas—and in six short months, they’ll be joining the veterans out in the field to continue protecting and serving endangered wildlife.