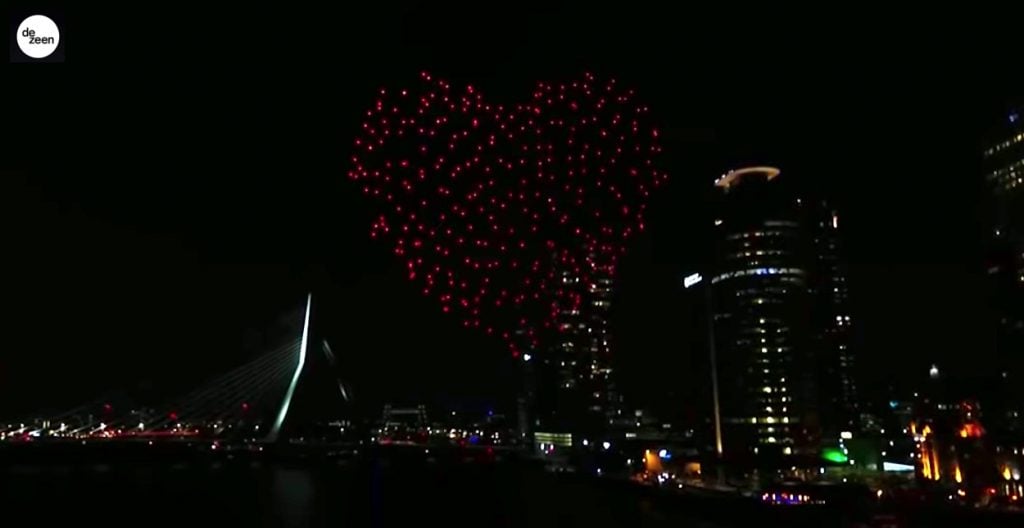 The Amsterdam design firm Studio Drift launched another special edition of their spectacular drone light show—this time presenting a moving red heart beating in the sky as a tribute to healthcare workers.

The dynamic aerial sculpture features 300 glowing, autonomous Intel Shooting Star Drones, which have been programmed to mimic the behavior of a murmuration of starlings in the sky.

The unchoreographed display is accomplished thanks to finely-tuned algorithms. Each drone acts and reacts in real-time to its network.

The performance above the Dutch city on May 5 was dedicated to the 75th anniversary of Liberation Day, marking the end of Nazi occupation in the Netherlands.

RELATED: Banksy Drops Off Superhero Nurse Artwork at Hospital in UK With a Thank You Note–LOOK

At the end of the 15-minute light show, the highlight of the night delighted spectators as the drones came together to form a bright red 3D heart in the air, which pulsing in time, as if it were beating.

WATCH the incredibly moving display streamed by Dezeen, as part of its Design Festival…

SHARE the LOVE With Frontline Workers and Friends on Social Media…