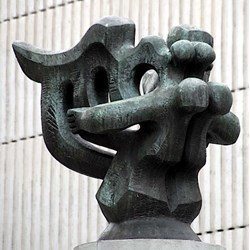 Image courtesy of: www.bigfoto.com
WHAT IS IT?
I have no idea.  And I would bet that
you do not know either.
But one thing you can be sure of.  It
just happened.   There was no thought
or design behind that.  It just happened.
That’s pretty obvious.
Now you and I both know better than
that.  Somebody put a lot of thought into that  – what ever it is.
So, if something that simple took a lot of thought and effort to come up
with, what ever it is.  Don’t you think that other things are the result of
some one thinking up or designing or crafting what ever they are?

We speak of the evolution of the automobile.  Yet even that evolvement,
or change is the result of some designer or engineer coming up with the
changes.  Then a craftsman of mechanic makes the thing.

And those of us who like to take a car or motorcycle apart and
put it back together – the way we want it – would be offended if you
insisted that it just happened.  [Yes, accidents happen.  But they
do not start reproducing themselves.  Well, I’ll admit, watching some
people or politicians would make you question this last premise.]

This is also true of; airplanes, coffee pots, houses, stoves, cloths,
motorcycles, boats, kites and toys. books, cameras, hats, etc. etc.
etc.  No matter how simple it is, there is a designer or craftsman
behind it.  Even if it is a goof up.

Or, how about hybrid plants?  Did you think that several plants got
together and decided to cross breed to come up with a bigger ear
of corn?  Try telling some gardener who has spent years developing
a better strain of plant that he/she was not involved

out a designer or creator behind it?
“Fools say to themselves,
‘There is no God'”
– Psalms 14:1 TEV