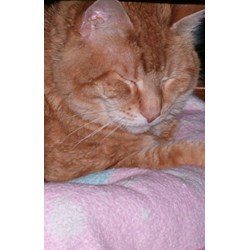 Conversation between dog and a cat

We know in reality that animals cannot speak and express how they are feeling verbally. For animals speak in their own special unique way with body language. If they were to able to verbally express themselves, conversation between two dogs and a cat. Names I am going to use in this story, name the cat Sammy, one the dogs is a chihuahua,name Queenie,other dog will be a collie/mix name PJ. This story is non-fiction but I am just describing hypothetically if animals did have a voice and could speak like human beings, was able to speak verbally. Sammy: Hi Queenie so the dog catcher caught you too, Ugh. Queenie: Yeah, He sure did. My human mom for no apparent reason I don’t understand threw me out in the streets to defend for myself. I was doing a pretty good job until this man with a big dog hook came along and put it around my neck. PJ: Well, I was found by this kind young boy and He wanted so much to keep me and even beg his parents to allow him to keep me but the parents sternly said No. A nice young married couple is coming to pick me up tomorrow to take me to their home. They are going to foster me in their home. I wish you and Queenie could come along. Sammy: We do too. It is not bad here at the shelter, we’re out of the cold and get two meals a day and water. Queenie: Nobody is gone to adopt me because I am old and half blind. Never know Sammy replied. Keep your Hopes up. You think so Sammy? Sammy: Yeah, some visitors who comes to visit the shelter and volunteer walkers are sometimes looking for older dogs because they don’t want all that responsibility caring for a puppy. If animals could speak and express to human beings how they feel when they are being kicked out in the cold and abandoned for unknown reason they do not understand, I believe animals would have a few words they would like to say to human beings who are abusive to their four-legged friends and other living creatures who lives in this world too. More of this conversation later.