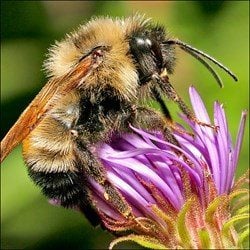 Stinging insects can be found just about everywhere. Portland exterminating services are all too familiar with the types and habits of these pests. Of course, they do serve a purpose in nature, to be sure. Sometimes, they can grow in number in an area which may create danger, such as a garden. They also can get into a home and nest there.
Before taking action against any stinging insect, it is best to know what you are dealing with. Here are some of the common  stinging insects in and around Portland Oregon. Some may be similar, but there are some characteristics which can help differentiate them.

There are three types of bees which are quite common not only in Portland, but throughout the United States. They are somewhat similar, but with a little knowledge, you can tell them apart.

Bald Face Hornets are somewhat similar to Yellow Jackets, but they have a distinctive white facial marking, and are mostly black otherwise. They like to nest in trees and shrubs and are extremely aggressive. They are able to bite and sting multiple times and will often swarm. They are so aggressive, they will swarm and attack even if someone gets anywhere near their nest. Since they often nest in bushes and trees along city sidewalks, they can be extremely dangerous. If Bald Face Hornets nest in or around a yard, the nest must be destroyed. It is not advised to attempt this yourself. Call in the professionals. They swarm so ferociously that people have died as a result. Portland exterminating services, such as All Pest Control Company, can put an end to these dangerous creatures.

There are actually several types of yellow jackets, and while they have a reputation for being aggressive, not all are. Some types are actually very docile and avoid people. Aerial nesters are not as aggressive as the ground nesters. All are capable of stinging and biting, however. Their stings are known to be particularly painful. Yellow Jackets can and do swarm, but this is more common with ground nesting types.
Yellow Jackets have yellow and black stripes, but they appear to have more yellow than black. Most people are keenly aware of what yellow jackets look like, because they are often taught at a young age what to watch out for.

For the most part, bees do not set out to harm humans. On that same note, humans are usually stung at least once in their lifetime by bees or wasps, but it is not an everyday event. Swarming and aggressive types of bees, however, should be taken care of immediately. At times, even the less aggressive bees can be a problem. Getting stung is not something most people can shrug off, and if there are children involved, it can be a traumatic event.
If you live in the Pacific Northwest, and have a problem with stinging insects in your yard or home, calling Portland exterminating services will help.  Trying to rid your yard, particularly of swarming insects can be dangerous, to say the least. In some cases, it has proven to be fatal. Bees waste no time in acting if they feel the hive is being attacked, and sneaking up on bees is nearly impossible.
We hope this information will prove useful to you. Thank you