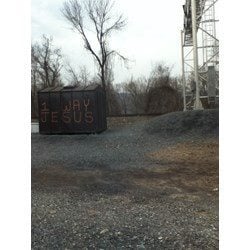 Signs, warnings, everything will perish on the face of the earth

Look! some people who has their own opinion about the second coming of the Lord may believe what is written in the scriptures is just a myth, the bible contradicts what is saying. I am one who believe the bible is the truth and believe every word God has written. It will happen and it is happening all around us today. God is going to destroy the earth and bring destruction upon the earth. It is written!
Isaiah 24:1-23 says,
The Lord is about to destroy the earth and make it a vast waste-land. See how he is scattering the people over the face of the earth. bankers, lawyers, police officers, buyers, sellers, lenders, borrowers, and debtors, the list goes on and on. All the joy of life will vanished, the peace among men. The earth will suffer for the sins of the earth. The earth will dry up and all living thing will dry up and die. Book of Revelation will give more information and prepare you for the second coming of Christ. My friends the bible is words of truth, words of wisdom and knowledge. Don’t be the one left behind.
Look around you, Listen to the news and ask yourself, listen, pray, open your eyes. Hear of hurricanes, murders, innocent lives being murder every second. Many may asked now, Why write a topic I have chosen about the end times. Well, just a few days ago, which very rarely happens in our little town. Husband comes and wakes me up and to look outside of our apartment window. I was stunned of what I witnessed. Swat team, State police officers and even National guard I believe they may have been. They were dressed in Military uniforms. It was frightening to know that a crime was being committed right in your own neighborhood. Neighbor man home was search for weapons and bombs. According to what was being shared on the News that the man wanted to just sell these weapons and bombs. The fact him having such items in his home is scary and was very frightening for the close by neighbors who lived only few house from the home that was being raided. Many neighbors knew of him but didn’t know personally. Not that he is a bad man but he made bad choices. with bad choices to break the law, to sin, comes consequences and the man who was arrested was forty year’s old, a father to a 11 year old girl. What example was this man leaving his child? Evil verses good and the good will win and have Victory at the end.
It is only going to get worse according to the scriptures. There is already rumors of wars, government betrayal, famine,  murders, destruction everywhere, hurricanes, tornado’s, gnashing of teeth. Destruction falls on the earth from the heavens. (Isa. 24:18) In those days of the end times, the Lord will punish the fallen angels in the heavens and the proud rulers of the nations on earth. Everything will be lost, destroyed, and the earth is shaken down and has utterly collapsed. There is hope to be saved, life will be spared, repentance, believe, study the scriptures, reading God’s word and applying the word to your life. Having a personal relationship with God. Ask, and shall receive, knock and the door shall be open. (1 John 2:15) Love not the world, neither the things that are in the world, If any man love the world, the love of the “Father” is not in him.
Are you ready?
Do you have a personal relationship with God?
Know my heart dear God, Know my thoughts, and lead me in the paths of righteousness for you name sake. We all sin and come short of glory of God but Jesus died on Calvary for all men and gave his life so we can be saved from destruction, saved from damnation.