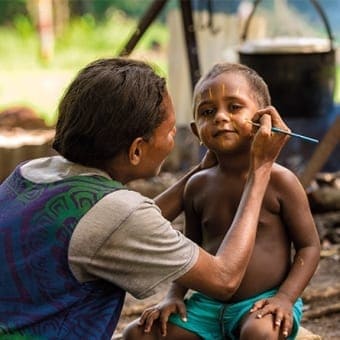 For more than 60,000 years, indigenous tribes have inhabited Australia. Many places still preserve the indigenous trails with sacred sites, awe-inspiring landmarks and Aboriginal museums. And where to discover these trails better than at National Territoryâ€™s capital city rich in history & culture. Here are the top picks for amazing Aboriginal experiences on a Darwin sightseeing tour!

For authentic Aboriginal culture and nature tour, Pudakul tours is a top-drawer choice. Operated by fully Aboriginal family, your experience is definite to be rich with information, knowledge and tribal culture! Engage with local Aboriginal people, the environment and wildlife around them and take part in their day-to-day activities like Â basket weaving, dilly bag making and much more. Make sure you have a go at throwing a spear, blowing a didgeridoo and playing the clapsticks. Learn about local bush food and medicine and taste authentic damper (bush bread) and Billy tea.

Whatâ€™s an Aboriginal Darwin day tour without a visit to the birthplace of didgeridoo! Wedged between Kakadu and Indian ocean, Arnhem Land is a natural paradise with a population of only around 17,000, mostly Yolngu people. This island hosts many festivals including the famous Garma and Barunga festivals showcasing Aboriginal culture, landscape and traditional arts and craft, with true authenticity. The beachsides are where youâ€™ll see the ancient rock art and the locals fishing Barramundis with the traditional gear. There are various Aboriginal Art Centres and sacred sites around fo you to complete your quest.

Are you an art fanatic? Only a three hour drive away from Darwin is the Kakadu National Park, home to worldâ€™s greatest concentrations of rock art sites, some of it dating back to 20,000 years! The paintings here provide a fascinating record of the Bininj Aborigines and their relationship with the land and wildlife around. The park has also been home to Aboriginal people for more than 65,000 years and is inhabiting 19 clan groups in present.

Darwinâ€™s most important World War II site also encompasses Aboriginal art and material culture. The Larrakia people speak for this land. Aboriginal people have used the land for thousands of years and the numerous shell middens here show it was an important food source. Charles Darwin National Park was also a part of a network of military sites established during World War II, so do visit if historic places tend to fascinate you.

Every August, Darwin hosts the Aboriginal Art fair, showcasing the work of emerging and established local artists. From paintings on canvas to bark paintings to traditional sculpture to cultural regalia, experience the rich diversity of artwork that the Australian Aboriginal history is associated to. This fair is also your space to meet the Aborigines and learn from the variety of different cultural groups across Australia.

If food fascinates you, visit the historic Lyons Cottage, a little cafÃ© known for its authentic bush tucker recipes and indigenous ingredients. In addition to conventional dishes such as gourmet toasted rolls, they also serve mix-and-match dishes with contemporary items such as damper with jam (Kakadu plum or wild rosella jam), the kutjera (wild tomato) and aniseed myrtle feta damper, or the saltbush dukkah, avocado and feta smash and a lot more!