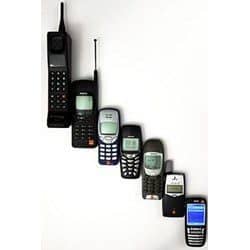 Contrary to popular belief, cell phones have not be around forever.  Ask those of us that were born before 1980.

They started with home phones, and if you’d really like to push the window, communication started with telegraph machines, before telephones.
Home phones started evolving in the 1980 to being outside of the home, and in the 1990’s went completely out of control with use, and now if you don’t have one, some would argue that you are not only in the dark ages, but have no ability to communicate with others at all.
While this is certainly not the case, it’s understandable why children and now young adults would see things in this light.
Cell phones and computers have taken us into an age that most never dreamed of.  Certainly those with great-grandparents and in many cases grandparents didn’t have a phone or television, let alone a cell phone that was part of their lives.
This brings us to the combining of cell phones and computers.  The next evolution in the world of technology, has now come upon us.
Is I sit here and write this, I’m listening to a recording of a woman telling me that all I need to do is to snap a picture of a receipt and it will automatically be stored on line.  Again, 100 years ago, the Titanic sunk, there was no concept of cell phones, let alone smart phones.
Enter smart phones…enter Mobile Web Technologies
Where would you be without...
your cell phone or smart phone?

Unlike 30 years ago, smart phones are computers.  They allow for you to do everything that you can do on a computer.  In fact, any many cases you are now able to do as much if not more than with your table top or lap top.
The reasons for this are simple, your smart phone is a computer within the phone.  Since it is a computer it can bring up web pages and business just like your regular computer does, but there’s one catch.
It’s smaller!  The fact that it’s smaller has a major impact on what you as the consumer can see.   This then poses an interesting question; does your webpage look the way you want it to on a smart phone?
If you’re not sure, or if it doesn’t keep reading.
Mobile Web Technologies...
specializes in making sure that your web pages will give you the advertisment and exposure that you need.

Mobile web technology, means having people that can see what your customers will see.  That’s a bigger skill than you may realise.
Remember, smart phones aren’t the same as your computer, they are smaller, much smaller.  Consequently, everything you see on a computer screen you cannot see on your smart phone.
This means that the smart phone needs to have pages designed for that size screen.  That means that edges, articles, prices, contact information and so forth, may not be able to be seen on a smart phone.
If that information is critical, then it translates into loss of money, your money.
And that shouldn’t be the just wrong, you shouldn’t lose money because your webpage doesn’t fit on smart phones properly.
Your solution is to get them adjust to the right size and form for smart phones.
Mobile Web Technologies
Is one such company that has the skill and experiences to stop the hemmorhage from not so smart web designs.