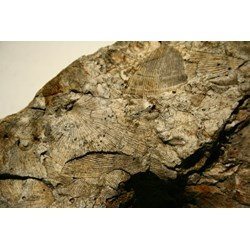 You have seen fossils.  In fact, some of us consider
ourself an “old fossil.”  But what is it that is unique
about the fossil pictured here?

I own several acres of woods.  Scattered through these
woods I have picked up more than a dozen fossils just
laying on the ground.  Fossils of sea shells, all of them.

These woods are located in the Ozarks.  About one half
way between Clifty and Forum Arkansas on a hill top.

A topo map shows this to be at about 2000 feet above sea
level and around 400 miles from the nearest ocean.
How did they get there?

“…on the seventeenth day of the second
month all the outlets of the vast body of
water beneath the earth burst open, all the
floodgates of the sky were opened, and rain
fell on the earth for forty days and nights.
On that same day Noah and his wife went
into the boat with there three sons, Shem,
Ham, and Japheth, and their wives.  With
them went every kind of animal, domestic
and wild, large and small, and every kind
of bird.  A male and a female of each kind
of living being went into the boat with Noah,
as God had commanded.  Then the Lord
shut the door behind Noah.

“The flood continued for forty days.
and the water became deep enough
for the boat to float.  The water became
deeper, and the boat drifted on the surface.
It became so deep that it covered the
highest mountains; it went on rising
until it was about twenty five feet above
the tops of the mountains.”
(Genesis 7:11-20 TEV)

Now you may not believe the “Bible” is
true.  But I have proof that it is right here
in Arkansas.