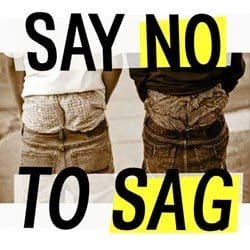 To me, it’s one of the most stupid things, fashionwise, that I’ve ever seen ( and I grew up in the bell bottom and butterfly collar days ). The thing that really amazes me is to see the wearers walking wide-legged ( just to keep the pants up ), and are constantly ‘jacking’ them back up through the crotch area ( cause they’re about to fall down ). And, on top of that, the ‘fad’ started in prison! There’s no way I could let my son follow anything down that path of destruction. Once the rappers picked up on it, I knew that it was just a matter of time. I knew I had to do something, so I looked my son in the eye, told him to look at how I wore my pants, and told him that his should look the same. He had to be about 8 or 9 years old at the time. I then told him that if I EVER caught his pants hanging in a manner that I felt was inappropriate, I would put my size 12 shoe in his butt. And he KNEW that I meant what I said. I can honestly say that I only had to get on him once, and if you don’t think that I kicked him in the butt, you don’t know me. He is 20 years old now and wears his pants like a young man should. On the other hand, my wife has a 23-year old son, and he wears his pants hanging. His dad is in his life, too, so I can’t say that dad being in a young man’s life will deter him from wearing his pants that way ( his dad wears his pants up, but he could have used my philosophy on that one ). I just know that a son emulates his dad, and that I saw that fashion faux pas coming, like a freight train, so I cut it off before it reached my son, through his friends, of course. Talk about derailing the train. All the authorities have to do is enforce the indecent exposure laws that are on the books, and at least the underwear won’t be showing. Then again, why jump all over the kids for doing this, when you go to the supermarket, and there’s some ‘supposedly’ grown person walking up-and-down the aisles with their pajamas on? I’d bet their parents would flip if they saw that. I wanted to. People, please! That’s just my thoughts. What’s yours?

And Wearing Pajamas In Public Is Any Better?