DRACULA and the Vampire Myth

This article will cover certain aspects regarding the book written by Bram Stoker about a villain with a taste for blood, a concept that has become a strong theme in cinema, books and TV. Producing constant variations with even a Dracula Films and the Bram Stoker film festival in Whitby. A huge following of Goth’s and more sinister connections, with Aliester Crowley, the OTO and the occult.

It begins with Stoker going from Dublin to London and seeing the play:
‘The Bells’ and a meeting with an almost real Dracula-actor.

Did the Golden Dawn and WB Yeates, and Crowley influence Stoker?

Did Stoker need to know about Dion Fortune’s Psychic Self Defence?

And the danger of following such links, becoming more connected to the themes behind a myth, into real life drama: the connections on the path of Scientology to the OTO and an early death for one young woman.

HOW THE STORY BECAME A MAJOR THEME IN ENTERTAINMENT

The mythos of the cult of Dracula is based upon certain observations and possibly some experiences by its originator; just a good horror tale. But these days due to an entire sub culture and a large genre related to such concepts; huge TV popularity of shows like True Blood. The root of it all glamorizes unpleasant themes and can potentially send people off seeking and researching related issues leading to more serious consequences.

Many people seek power and influence over others, it appeals to certain types of individuals and the Dracula concept of terror, blood sucking and total domination of others is a negative driving force for many, especially for quite a few in the political and entertainment fields!

But, lets start at the beginning:

Dacula was written by Bram Stoker, probably after visiting Romania and joining the London occult group: The Golden Dawn.

Bram (Abraham) Stoker was born in Dublin on the 8th November: 1847 he was a sickly youngster and whilst growing up and being constantly looked after by his mother she told him lots of Horror Stories!

He won a scholarship to Dublin’s Trinity College where he studied Mathematics. Its here that he met W.B. Yeats, soon to become a famous poet. When he graduated in 1867 he became an Irish Civil Servant and also got some work submitting articles as a freelance journalist as the drama critic on Dublin’s Evening Mail and later became its part-time editor.

He met Sir Henry Irving, in Dublin, a very famous actor of the period, whilst covering a story about his theatre appearance in the city in 1876. Irving offered Stoker a job as his personal secretary and so in 1878 he left Ireland to visit London: where he stayed and took up the offer.

Sir Henry Irving appearing in the play ‘The Bells’ was a performance that affected Bram Stoker as he witnessed the amazing talent of almost shape-shifting by the characterisation of Irving. He also witnessed at first hand how Sir Henry terrorised his wife and appeared to suck out the energy from her. We have all met people in who’s company we feel drained.

It was in London
where he again met Yeats and with him joined the occult group: The Golden Dawn which was operated by McGregor Mathers and Aliester Crowley. As members of this group who
met near the site of today’s British Telecom Tower
and were reputedly involved in Sex Magick and Astral travel, they were going into unseen dimensions. During these
Astral adventures several group members reported strange things including
attacks upon them by none corporal entities. One member a female Violet Mary
Firth Evans AKA ‘Dion Fortune’ suffered many such attacks and as ‘Dion Fortune’ – a member
of The Golden Dawn she wrote a book about how to defend oneself if attacked by such Dracula type Astral entities. Energy sapping phantoms, devils, jinns and such, which have been known in
folklore for millennia, seem to operate in extra dimensional dream states that many people experince.

Obviously you need to believe in such things to be able to be so influence – if
you don’t believe then this mind-set is sufficient protection. But many do wish
to believe and many are subversively intrigued by the power obtained by manipulation
of strange entities that are outlined in the actions of such ethereal
manifestations.
Without doubt, such encounters, within the Golden Dawn, seeing the actor Irving terrorizing (vampirzing his wife’s energy) and learning of the King of Wallachia – Vlad the impaler on a visit to Romania, must have mixed together to result in the novel: Dracula.

Hermetic Order Of The Golden Dawn

A closed occult order open only to a selected few who undertook occult studies into the higher levels of Freemasonry and the Kabbalah.

Crowley fell out with Mathers and started up his own occult group the OTO.

The Ordo Templi Orientis (O.T.O.) (‘Order of the Temple of the East’ or ‘Order of Oriental Templars.)
Crowley became infamous as the ‘wickedest man in the world’; which no doubt with his sense of humour would have suited him admirably.

Stoker knew Crowley and the mix of his experiences built up the Dracula story in concept; he built it around a figure from Transylvania who came to London first arriving at the Yorkshire port of Whitby.

Romania, ancient Wallachia; has been invaded on multiple occasions: Dacians, Romans, Ottoman Turks, Hungarians, Russians; so often that when visiting the country I heard that the Dracula story had been fostered to deter invaders and tourists! The Carpathian mountains are stunningly beautiful. The Apuseni region is particularly remote and verdant, with lots of huge caves.
The Bucegi mountains have a plateau where the Romanian Sphinx is located. I was told that lots of UFO’s are seen here. The Carpathian mountains generate lots of folklore and myths.
Vlad did not start out as a despot, apparently – I was informed that as a child he realised as a Prince he was treated better than others, as king he wanted to give something of his luxury to his people, and so put out gold drinking vessels at town centre fountains. Disappointed when some people stole them, he became known for the way he then went on to treat thieves, burning them and impaling them on posts.
I was told that there was a woman vampire, and that these mountains were a refuge in Noah’s time of flood and other strange legends persist; that no doubt, the people that met Stoker told him for shock and for their own entertainment value; as more recently I was also told! 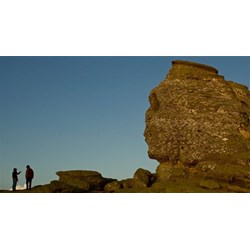 A ship without sailors lands in Whitby; the opening theme of the Dracula novel, and so Whitby has become a Mecca for Dracula devotees, a film festival, a museum, and several events take place each year attracting a Goth’s festival and all sorts of people dressing up in period costumes.
I went in 2010 up the steps to the old church when an actor playing a part in full period costume asked the lady I was with where she had come from, when she said Brasov in the Transylvania I believe he thought we were winding him up, but it was true and that was why I took her to Whitby, after I had visited Romania. She liked the Fish & Chips best but was somewhat annoyed that the British had usurped ownership of ‘their’ Dracula which means Devil in Dacia-Romanian.
She said that the Gypsies who invaded her country so long ago were originally from Egypt or maybe India and they believe in these tales and are very superstitions and practice magic so not to have to work! 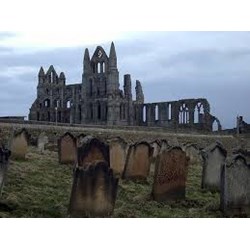 Vampires and Zombie genres for entertainment are major
revenue producing themes, not likely to decline any time soon.

But is there a sinister side? Let’s return to Crowley and
remembering he was a friend of Bram Stoker and they both participated in magic
rituals.

Crowley’s OTO in the USA was taken up enthusiastically by a
man named Jack Parsons (The JPL NASA rocketry centre is named after him). He
was a friend of Ron L. Hubbard later he became the leader of the Scientology cult who believe
in space alien influence on the Earth amongst other strange occult related
concepts.  Hubbard and Parsons as sorcerers: performed
OTO occult rituals similar to those done by Crowley who said he contacted a
demon named Aiwass, who looked very similar to today’s UFO abductee big eyed
aliens (or Demons/Jinn etc).

Crowley, allegedly from some sources, impregnated George
Bush’s grandma whilst she was attending his ‘Abbey’ in Sicily. The resulting Grandpa Bush
was the instigator of the Skull & Bones occult society at top USA
Universities; that all presidents (apart from Kennedy) were members of. Bush and
his pals stole the American native Indian’s bone remains and the skull of Geronimo
(its never been returned).

Parsons was killed in an explosion at his home soon after
the occult ritual with Hubbard. This according to some commentators and occult historians left a rip in the time dimensional astral fabric that distinguishes this Earthly material world from that of the Demonic regions. Leaving an open door.

Hubbard went on, dressed often as a Navy Commodore, to write science
fiction and start up Scientology, which many maintain is an outer, circle for
the OTO.

Many USA politicians are in strange fraternities and rumour
has it that many top level NASA and CIA staff are also into Crowley and the OTO.

Scientology has many members who are famous entertainers and
actors.

Such things are copied and followed by those who go way past
the entertainment features of excitement connected with evil manifestations.

One recent sad result has been the adoption of these themes
by Sir Bob Geldorf’s daughter Peaches who was recently found dead, in mysterious
circumstances. She was an outspoken advocate for Scientology, the OTO and Crowley….
Did she start with the Dracula myth as a harmless childish dressing up Halloween prank?