Happy Birthday to Carly Simon, who turns 75 today. The singer–songwriter-musician rose to fame in the 1970s and pumped out a string of both original hits—Anticipation, You Belong To Me, Haven’t Got Time for the Pain, The Right Thing to Do—and non-original hits including Nobody Does It Better, from the 1977 James Bond film The Spy Who Loved Me, and Mockingbird (the duet with former husband James Taylor).

But, it was the iconic  You’re So Vain that became a worldwide hit, turning Platinum and earning her 3 Grammy nominations, including Record of the Year and Song of the Year. After keeping a secret for decades, Simon revealed that Vain was, in fact, about Warren Beatty—but just one verse. FUN FACT: Mick Jagger contributed backing vocals for the song.

With her contralto vocal range, she recorded Let the River Run for the film Working Girl. The song won her a Grammy Award, an Academy Award, and a Golden Globe Award—becoming the first artist to do so, having composed, written, and performed the track entirely on her own. WATCH an honest interview from 8 months ago… (1945)

She wrote two memoirs (Boys in the Trees), and is the author of several children’s books, including Amy the Dancing Bear and Midnight Farm. In October 2019, she released a second memoir that recounts her friendship with former First Lady Jacqueline Kennedy Onassis, entitled, Touched by the Sun: My Friendship with Jackie.

More Good News from this Day in History:

And, on this day in 1956, the renegade travel host and chef Anthony Bourdain, was born. With his food and culture show, No Reservations, and the groundbreaking book, Kitchen Confidential: Adventures in the Culinary Underbelly, he became known as “the culinary bad boy”. 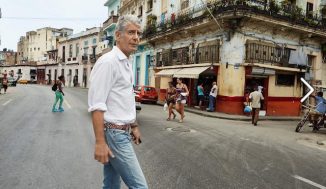 An executive chef for many years and heroin addict, the New Yorker eventually recovered and “changed the voice of food”. After eight seasons of Parts Unknown, a travel-culture-foodie show for CNN, and possibly still suffering from depression, Anthony took his own life in 2018.

Happy Birthday to Justice Sonia Sotomayor, who turns 65 years old today. Born to a poor Puerto Rican family living in the Bronx housing projects, she rose to become the first Hispanic justice on the U.S. Supreme Court. Her father, who did not speak English, had a third-grade education and died when Sonia was nine. She was inspired to become a judge while watching the Perry Mason television series and recalled that her mind was made up: “I was going to college and I was going to become an attorney, and I knew that when I was ten.” After graduating from Princeton and Yale on full scholarships, she eventually became a lawyer in private practice before, in 1991, being nominated to the U.S. District Court by Republican President George H. W. Bush. (1954)

She is also the author of several books, including a children’s book, Just Ask!: Be Different, Be Brave, Be You

And on this day in 1967, the first live television show via satellite was watched internationally by an estimated 400 million people. Our World featured segments produced in 14 countries on 5 continents (like, Marshall McLuhan in Canada and Pablo Picasso in Spain). The Beatles performed live, debuting a song specially composed for the occasion, ‘All You Need Is Love’, with backing vocals provided by Mick Jagger, Keith Richards, Eric Clapton, Graham Nash, Keith Moon and Marianne Faithfull. (WATCH some of the Our World broadcast below. The Beatles portion, previously available on YouTube, is blocked for copyright reasons.)