On this day 150 years ago, Christmas was established as a federal holiday in America. A Christian festival celebrating the birth of Jesus, December 25th is also enjoyed by non-Christians for its gift exchanges and holiday lights hung in houses and towns to brighten the dark days of winter.

In the 1800s, Americans’ views on Christmas changed a great deal. The author Washington Irving is often credited with shaping Christmas customs in the U.S., like his promotion of St. Nicholas as a beloved character who “came riding over the tops of the trees, in that self-same wagon wherein he brings his yearly presents to children.” Irving loved the merriment of how Christmas had been celebrated in England, with singing and dancing, before the Puritans got involved. LEARN more… (1870)

German immigrants brought with them the practice of placing evergreen branches and trees in homes and Catholic immigrants brought the tradition started by Saint Francis of setting up small nativity scenes. By the late 1800s, most Americans celebrated Christmas—especially those in the South where Alabama declared it a legal holiday in 1836 and Louisiana and Arkansas followed in 1838. Eventually, President Grant and Congress declared it a national holiday, so federal employees could be home with their families.

And, on this day in 1940, Muhammad Yunus, the ‘World’s Banker to the Poor,’ was born in Bangladesh.

The Muslim economist and civil society leader was awarded the Nobel Peace Prize in 2006 for founding the Grameen Bank and pioneering the concepts of micro-credit and micro-finance as a way to release poor people, especially women, from dependency on welfare. He is author of three books, including, Banker to the Poor. In 2011, he co-founded Yunus Social Business Global Initiatives to use incubator funds and provide advisory services that empower social businesses trying to solve social problems around the world.

And Happy 54th Birthday to John Cusack. Born in Illinois, the actor, producer, screenwriter and renown Cubs fan is beloved for such films as High Fidelity, Say Anything, Grosse Pointe Blank, Con Air, Serendipity and 2012.  According to reports, John—whose sister Joan Cusack is also a successful actor—practices Transcendental Meditation, and uses the technique to more thoroughly explore the depths of his diverse characters. (1966)

Other Notable Birthdays: Elon Musk (49); Kathy Bates (72); and Mel Brooks (94), the legendary director of comedies like Blazing Saddles, Young Frankenstein, and The Producers. He belongs to an exclusive club of entertainers honored with the grand slam: an Emmy, Grammy, Oscar and Tony. 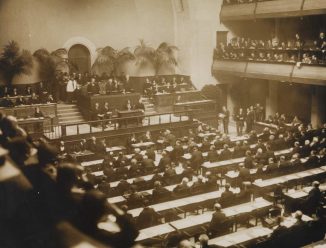 On this day in 1919, the League of Nations was founded as the world’s first intergovernmental organization whose principal mission was to maintain world peace. A result of the Paris Peace Conference that ended the First World War, its primary goals, as stated in its Covenant signed a century ago, included preventing wars through collective security and disarmament and settling international disputes through negotiation and arbitration. This diplomatic philosophy represented a fundamental shift from the preceding hundred years.

At its greatest strength it had 58 nation members, but the onset of the Second World War showed that the League had failed its primary purpose, which was to prevent any future world war. The Society of Nations, as it was called in France, lasted for 26 years. Though the United States never joined, they did join the United Nations, which replaced the League after the end of the Second World War and inherited several of its agencies and organizations. 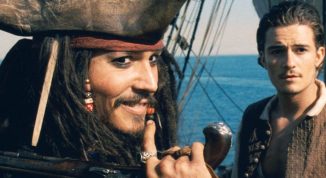 And, on this day in 2003, audiences first enjoyed Pirates of the Caribbean, when the film premiered at Disneyland, the famous park with its amusement ride that inspired the story. The first in the film series, “The Curse of the Black Pearl” stars Orlando Bloom, Keira Knightley, Geoffrey Rush, and Johnny Depp, who won his peers’ coveted SAG award for best actor in a leading role—and also was nominated for an Oscar and BAFTA. His character, the wily pirate Jack Sparrow teams up with blacksmith Will Turner to rescue a kidnapped noblewoman from the Captain’s old ship, the Black Pearl, but then discover an ancient curse. WATCH the trailer…