His brilliant role as a depressed author and wine aficionado in the film Sideways (see the trailer), nearly brought down the Merlot industry in California—because his character despised the red, preferring Pinot Noir.

He’s also known for his work in The Illusionist, Straight Outta Compton, American Splendor, Too Big To Fail, Downton Abbey, 12 Years a Slave—and for playing the U.S. president in John Adams, which earned him a Golden Globe Award, a Primetime Emmy Award and Screen Actors Guild Award. Since 2016—or maybe the coronavirus—you may know him from the TV series, Billions. WATCH his interview from lockdown and see his new drawings… (1967)

And on this day in 2006, the Brazilian government began protecting an area of Amazon rainforest even more vast than the state of California. 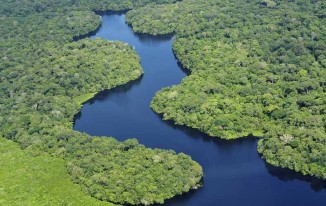 Partnering with Germany, the World Bank and WWF in 2002, a Brazilian conservation group established a new park system, the Juruena National Park—now the third-largest park in Brazil. The system of 80 reserves and parks now protect the vital habitat of more than 190,000 square miles. The Success has been phenomenal for one of the world’s most ambitious conservation project— the ARPA (Amazon Region Protected Area Program). Brazil has been able to reduce deforestation in Amazonia by nearly 90% in the last ten years.