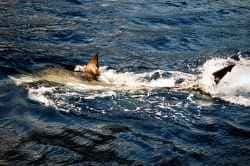 This is How You Survive a Shark

A shark attack is everyone’s worst nightmare but it is also something that is extremely rare. It only seems to be more common because any attack is immediately reported. However, if you do happen to be faced with a shark, what can you do to make sure you come out alive?

Picture of Great white shark thanks to Mila Zinkova and Ookaboo!

Sharks are chase predators which means if you flee, they will chase after you. They are capable of detecting panic, fear and vulnerability which could be your downfall.
If the shark is circling you, he/she is checking you out as a possible prey item. Try not to panic or start flailing around. Do swim in a controlled manner.
I believe they do know the difference between a human, a seal (their natural prey) and a surf-board.

Instill Doubt in the Shark's Mind
If you can do this, you can make it think twice about attacking you. Like most predators, sharks prefer easy, weak and vulnerable prey.

If you present yourself as a difficult prey item, chances are the shark will leave you alone. Its natural prey can cause it harm when attacked so often the shark will pick out the young, weak, old and injured to avoid injuring itself.
If the shark can’t quite figure out what you are, there’s a good chance it won’t try to eat you. Sharks prefer to know what they are about to eat!