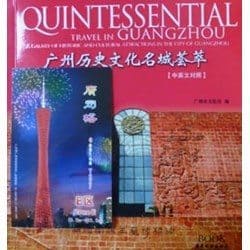 The mega city of Guangzhou in Guangdong province is sprawled over both sides of the Pear River.
Once known as ‘Canton’ a mispronunciation of CantÃ£o, transcribed from Guangdong by the Portuguese and the easiest way to pronounce Guangzhou for Westerners is ‘GwanJoe’.

The city has several crossing points over and under the river: ferries, bridges and a tunnel. At night the river comes to life with illuminated boats traveling along with tourists taking pictures of the brilliantly lite modern skyscrapers along its banks. Most impressive is the magnificent Canton Tower.

The Communist led revolution began here in Guangzhou and Mao Ze-dong had a house here and headquarters and offices.

Five Rams pictured here is the Symbol of the city.

One thing you notice about Guangzhou right away; this is not Beijing! It may have fabulous tall glass skyscrapers and a magnificently modern Opera House, yet it retains much of old China!

The most obvious differences are the older buildings and the tree lined streets. In summer the climate, can be hot sticky and steamy, intermittent sun and rain so umbrellas are required for both circumstances and the natives are all very friendly.

Trees, trees, trees everywhere in this huge sprawling city. These trees are very old and mercifully when the sun is high in summer and the humid wind blows in from the ocean, these trees provide both shelter and a micro climate.
Ancient and precious trees are featured in the city guide book: Ceiba, Eagle-claw Orchid and pine trees.

The canals are tree lined and the magnificent parks of this city Peoples & War Heroes Parks are simply magnificent.

Things to see and do in Guangzhou

Take a night cruise along the Pearl River; have a local beer and see the illuminated skyline.

Go to the top of the Canton Tower.

Visit the old European Embassy sector; Sha-mian, the green pearl, an Island on the river.

Go to a performance of Guangdong Opera; but not performed at the cities amazing modern opera house!

Eat in local small Cantonese family restaurants, if they don’t speak English just point to the picture menu, or to what others are eating… try it, the food is cheap and delicious.

And of coarse there are lots of glass air conditioned shopping malls, if you don’t want to look and shop at the fantastic old style street markets!

There is one internationally famous pop singer from the city: Dadawa.