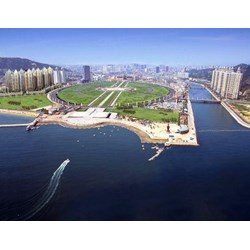 A Coastal tourist city and port

Dalian, in Liaoning, is one of China’s fastest growing cities. Its virtually all new. 40 minutes by plane from Beijing its on the coast, on the Liaodong Peninsula facing the East China Sea, across from Beijing, part way to North Korea; a coastal region that points into a huge bay. This is where the British first established a deep water harbor for their Opium business via the East India Company at Port Arthur – now LÃ¼shun Port. Dalian has been occupied by several countries England, Russia and Japan, but these days its a major tourist resort, port, Industrial and business centre. It holds many major international events including the World Economic Forum meetings and the biggest Chinese Beer Festival: Dalian is very modern, European style city with huge parks, recreational areas and large funfairs, with a population of nine million and growing.

It holds many accolades: Fashion City, Soccer City, and China’s best tourist city (if you like modernism!). The city even has a Fairy Tale castle hotel on a mountain overlooking one of its major park Squares.

Dalian has many squares, some are huge with Xinghai Square as the most beautiful and almost at the coast. This area is used for major international exhibitions, such as the Dalian Beer Festival in the summer and New Year fireworks festival in in Spring. The square, twice the size of Beijings Tiananmen Square was built in 1997 to commemorate the return of Hong Kong to Mother China. In the centre is a winged dragon white marble column with dancing dragons running up and down.

Things to do and see

Picture shows a City-Navigator, one side has an LED advertising screen, the revers; a city map and touch screen informing about tourist locations etc.

Take a ride on the old Trolley car, from the Russian sector of old Dalian.

Take a walk along the Haibin (Coastal) Road and see many sights: beaches, fun fairs, MarineLand, Bungy Jumpers, singers and dancers in the park, beautiful trees and flowers everywhere.

Wander about in Donghai Park and Tiger Beach Ocean Park.

Polar Park, has ice and Polar region animals and 3000 fish.

Forest Zoo, Baiyan Mountain, a zoo for animals to roam free: with Panda’s.

Look around the Fish & Seafood Market near Xinghai Square.

Lots of beaches and safe swimming.

Martial Arts Hall, in a modern copy of an ancient traditional Chinese building, lots of weapons and martial arts displays.

Visit Tongniuling Hill: ecological garden with great views over the city and a Flying Saucer restaurant on top!

The area is also a Golf and Ski resort.

Port Arthur – Lushun is very close to Dalian City (40 miles). It has an interesting Opium Wars Museum, and historical sites of the Russian expulsion of the Japanese from Manchuria in WW2.