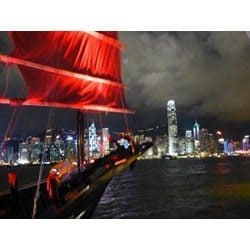 I remember I was humming ‘Hong Kong’ garden by Siouxsie Sioux and the Banshees as I took this photograph on the Kowloon side facing Hong Kong.
It had just rained as evening approached, cooling the day down into evening. Low Clouds moved rapidly overhead which added to the magical atmosphere of this illuminated city at night. Lasers flashed and at 8 pm the buildings began to change their lighting sequences, as speakers blasted out a strange accompanying musical score, all courtesy of the Kong Kong tourist Board.

Once upon a time, before the treaty to return Kong Kong to China all the old trams where painted in the same livery. Today they each have advertisements colorfully painted all over them. That tells you something about Kong Kong’s commercialism, and no doubt it has become a model (of commercialism) for China to follow.

However instead of any British influence in mainland China its much more dominated by American commercialism, with hardly any noticeable influence or commercial activity by the British: not even a British Pub!
Now the Chinese people do like the British but they buy from America because America has a global commercial aspect, whilst Britain sleeps. Not a British pub in any city in mainland China! And I couldn’t even find one in Hong Kong. German, Belgian and other bars were represented but few and far between, as most people drink in hotels and restaurants and pay outrageous prices. I ended up buying cheap bottles of local beer in a Chinese supermarket and heading back to my hotel room! I stopped humming ‘Hong Kong Garden’ as I wondered how the UK was going to manage to compete in this changing world of emerging commercial superpowers, without an export strategy?

Its as if, when the British left they took their bat and ball home and gave up on any commercial activity to sulk in a corner regretting an empire lost.

Things to do and see

Coastal promenade walk from the Star Ferry Kowloon: Said to be one of the greatest views of the world! See the film stars walk and Bruce Lee statue.

Take the famous Star Line Ferry across the mouth of the Pearl River from Kowloon to Hong Kong Island.

Go up to The Peak for that famous photograph of the city below.

Take a tram ride through the city.

Victoria Peak Gardens: At the Peak, but for the best garden see the next section.

A night at the opera: Chinese opera, yes its got discordant screeching, but with martial arts and dancing all mixed together: don’t miss it!

A nearer city location is Shenzhen, once a minor town in ‘the New Territories’ now after only twenty years its been called Gotham City!

Macau is easy to cross to by ferry; see the Portuguese ex-colony with colonial architecture.

The traffic exhaust fumes are very noticeable in Hong Kong due to the amount of vehicles crammed into such a relatively small area, it gets worse under certain weather conditions; i.e. no wind & low cloud.

Here you will find fantastic tropical gardens without doubt a great place to wander and a little known and not too crowded Hong Kong gem!

An amazing fountain you can stand in.

Here you can relax in the most peaceful place in the city, whilst below the busy hustle bustle of commercialism continues…