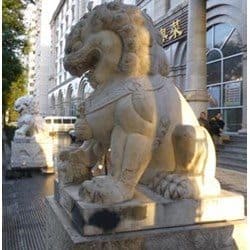 Enduring symbols of protection, good luck, family values, and good Feng Sui energy are at almost every entrance in China. In the picture the male lion holds the world under its right paw, depicting strength. Whilst its female partner pets a lion-cub, shows caring and family connectivity; very important symbols in China. Images of the things of value and belief, the undercurrents of Chinese values. Beliefs we can all support but also in hidden energy forces (feng Shui) or superstition, depending upon your individual point of view.
Whatever your opinion, these symbols link this modern city with its values, its culture and its past.

It’s an image of 5000 years of continuous, with some obvious interruptions, of cultural development of this civilization into the modern world: with Beijing enduring as its most modern capital.

Symbolic of a new country

The only residual large scale picture of Chairman Mao Ze-dong in Beijing is positioned at the entrance Gate of Heavenly Peace – to the Forbidden City, opposite Tienanmen Square in Beijing. In his lifetime Mao despised The Forbidden City and let it fall into ruin as a symbol of a corrupt past. This surly tells us something. In Cuba, a communist dictatorship, where every office, shop, business premises and entrance to most private homes MUST have a picture of El Comondante Fidel, or a shrine to Che. Symbols showing the dominance of the countries leaders. Whilst here in China, a supposed Communist regime of similar values; has none of that. Certainly things have positively changed since the student revolts in Tienanmen Square at the end of the 1980’s.

Certainly there is respect for Mao, but things have moved on and a more enduring links with strong past symbols are back. Today’s modern example of communism with democracy – democracy has ancient roots known as â€˜Minzhuâ€™ â€“ people â€“ rule, and is connected with Confucianism, another symbol abhorrent to Mao, which is now fully accepted by the current Chinese leaders, who are less visible four year term elected officials, not for life.

The reason that Mao’s portrait is at this location is historic, as it was the location where he proclaimed China as a new country.

Things to do and see in Beijing

Beijing means Northern Capital as at one time in the past it was Nanjing in the south that held the title. Beijing has many historical wonders to see:

Of course visit the magnificent and historic Forbidden City: expect crowds as often there are around a quarter of a million visitors going through daily!

Take a trip to the Great Wall,, there are some sections with a cable car to assist your climb, other locations only have the steps themselves. As with a visit to any outdoor location especially in summer, take an umbrella and water with you.

The Ming Tombs are very interesting and have historic stories surrounding them and what a nice location to be buried in. The location was found under Feng Shui principles. The Northern Ming Tombs are near to one tourist section of the Great wall, so its possible to do both in a day.

After leaving the exit from the Forbidden City go across the road to Jingshan Park. Its a peaceful respite after the hustle bustle and crowds of the Forbidden City. You can climb steps up to the Buddhist Pagoda and take in horizon to horizon, panoramic views of Beijing.

Best early morning on weekends, visit the The Temple of Heaven Park, which has the Temples of Heaven complex, and lots of space with glorious ancient trees. People, mainly the old folks practice Ti Chi, sing and dance and paint here.

Chinese traditional opera has screeching high pitched singers, dancers, martial arts and accompaniment with ancient instruments: Beijing Opera is not to be missed.

Tongrentang Pharmacy Dazhalan Beijing is a large location for Chinese Traditional Medicine, its existed here for over 300 years. Here you will find lots of interesting things to see, its worth visiting just to look at the plants, the bottles and to drink in the atmosphere. Even if you don’t have any ailments!

Its fairly easy to get around to the main tourist locations in the city: use the Metro its very cheap and all information and ticketing is in English, and there are always people who will help. Don’t be afraid to ask, those uniformed policemen looking officials in the subway are not cops but assistants there to help YOU!