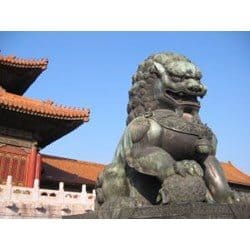 Walls around a state of the mind

Human nature has shown us in historical terms that Emperors and probably most if not all those that rule others are inwardly insecure and fearful of being deposed. Modern psychology confirms this as many in positions of power inwardly worry about loss of their position; holding the hidden inner conviction that they know themselves to be lesser mortals than their subordinates might perceive. Of course it is the status of the office itself that actually holds the power: and so it was with so many Chinese Emperors.

The mightiest Emporer in China was the Ming Emperor Yongle, who had the Forbidden City built.

The future Yongle Emperor was passed over as his fatherâ€™s (the 2nd Ming Emperor) nominated successor; in favour of Yonglâ€™s young nephew, who was throned at the palace and capital in Nanjing.

Yongle who commanded the Army challenged and overthrew his nephew, burning down the palace. However persistent rumours held that the young Emperor had escaped the fire.

Yongle had the capital moved from Nanjing to Beijing where he had built, in secret, the new capitalâ€™s palace complex: The Forbidden City. It is assumed he did this to remove any trace of authority of the last Emporer. Yongle throughout his life worried that his nephew would return and challenge him, so spurred on by such doubts, he retreated within the city he created. He surrounded himself with concubines and thousands of eunuchs as trustworthy administrators and set the style of Imperial life for centuries to come. This set the royal concept of an inward looking China ruled by insecure leaders obsessed within an artificial walled in world of absolute authority.
Most Emperors knew little about the outside world and this is also shown by Chinaâ€™s Great Wall to keep others out, mainly marauding Mongols. When funds for the wall were near to bankrupting the nationâ€™s funds, plotters in the eunuch administration got the Emperor to turn upon his own teacher and his friend the general who built the wall as â€˜unsubstantiatedâ€™ plotters against his rule.

Still closed until the 2oth century!

Marco Polo who opened the â€˜Silk Roadâ€™ for trading with China had a hard time doing so. To the shame of the British they opened up the Port Arthur region (Now Dalian) for trade of the worst kind; making many Chinese peasants into Opium addicts. Inevitably when a rebellion against it took place, the British went to war against the Chinese to enforce this drugs trade and it made the company operating it, into the first ever hugely profitable multinational: The East India Company. Life within the Forbidden city continued as though nothing had happened.

Ever fearful of outsiders the world evolved as time and traditions stood still within the Forbidden City. Towards the end in the 1900â€™s the Emperor was really a woman who had risen from the ranks as a concubine to get her son positioned as Emperor. When the internal revolution of the people â€“ the Boxer rebellion â€“ turned towards the Chinese rulers, the plan was to support them and divert their anger against foreigners. Yet another sign of the vein of insecurity that for centuries ran through the Chinese rulers, shutting out the outsiders, all outsiders; including their own people. So it was not the revolting Chinese people who entered and destroyed the insular rule of those within the Forbidden City but foreigners who occupied it. This move against the embassies of the West by the Boxers, secretly sanctioned by the machinations of the Forbidden City led to a combined attack upon China by a collaboration of external nations; Japan, France, Germany, Great Britain and the USA all combining to occupy the Forbidden City in 1900; whilst the Empress and her grandson: the last Emperor (as a small child) fled.

So the Forbidden City can be seen to have had quit dramatic effects throughout its centuries of absolute rule; its no surprise then, that a picture of Chairman Mao is positioned over the front entrance and facing Tiananmen Square: symbolic of the Communist Peoples Republic.

The Chinese no longer refer to the Forbidden City as that name but know it known as â€˜The Museumâ€™. It is the biggest tourist attraction in Beijing, enshrined in historyâ€™s an isolated anachronism that dominates central Beijing. However with valuables are not on show as they were removed in WW2 before advancing Japanese troops and still resid in Tiawan. Most of the treasures from the Forbidden City were taken to (Formosa) Taipei Taiwan by General Chiang Kai-shek and are in the National Palace Museum.

There are many lessons to learn from history such as the â€˜isolationistâ€™ policy of the Imperial ruling class in China; when all the world all about is evolving and changing it can be a dangerous thing. Maybe thatâ€™s one of the lessons of history that the modern Chinese government have learned from their history and so have embraced modernism and capitalism and growth more so than any other nation on Earth.

Secrets of the Forbidden City

Recently much more information has come to light about the Forbidden City:

The film THE LAST EMPEROR A great film; tells the story of Puyi, the last Emperor of China, from a small boy a – captive in the Forbidden city, to become – captive and re-educated by the Communist Red Chinese, eventually, a gardener, who died in 1967.

The Inverted World a science fiction story by Christopher Priest
With some interesting themes that could reflect some of the psychology behind the concepts of the paranoia of life in the Forbidden City?