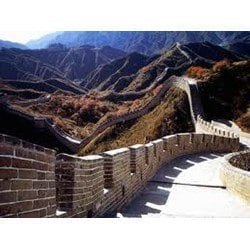 Older than we thought!

China had a series of walls centuries before they were built of stronger bricks and became what we are aware of today.

For many centuries BC warring states in China fought each other, hence many border fortifications were constructed out of earth and mud. Later, these mud walls were expanded and intermittently built to slow down marauding Mongols from the North. They were not connected up together in the continuous construction China has inherited today.

Around 220â€“206 BC the first Chinese Emperor Qin Shi Huang had these wall strengthened. Over a million, workers died building the Qin walls to make a barrier for defence after Qin had conquered and unified the warring states of pre dynastic china. Following dynasties intermittently rebuilt sections of these walls but in the tenth century there was no need as China was conquered by those of the North the Liao, Jin, & Yuan dynasties and until the thirteenth century, the walls were within the centre of the Empire; there was no need of these walls, until a later period emerged re-setting the old warring balance against the Mongols of the North. Tourist are often told that the wall dates back to the Qin period, of course some of it does, but the majority that tourists see today is from the Ming period (1368 – 1644).

General Qi Jiguang was responsible for getting the Ming Emperor to allow and fund the brick reinforcement and fortification of the walls and their more complete unification with thousands of watchtowers along the route.

It was Qi who thought up the strategy following the Mongols sacking Beijing in the 15 century. The existing walls were covered and new ones were coated with bricks. His strategy was to have his own soldiers build it, with moving brick works along the route. The soldiers were eventually to be allowed to bring their far flung families to live with them. Most settled into communities that today can trace their ancestry back to soldier wall builders. Qiâ€™s strategy was not to hid behind the walls but to use the watch towers to signal mounting incursions, whilst he and his men assembled at the near points to ride out and outflank the Mongol invaders as they approached; it was a very successful tactic.

Qi is mostly responsible for the wall we see today, but he fell out of favour with the power seekers in the Forbidden City; the bureaucratic eunuchs who were jealous and feared the power of the army combined with supporters in their own ranks. They eventually persuaded the Emperor to banish Qi. The wall was bankrupting the coffers of the nation. Assured that enough walls had been built and only miner skirmishes were happening, the Emperor had removed a what he was persuaded to believe as possible internal threat (from a loyal general) and resumed his walled up life with absolute authority and concubines galore.

Today the walls are a major tourist attraction, easily reached after a 45 minute motorway drive out from Beijing. There are several tourist locations for visiting and climbing the walls. There are also places with cable cars to take visitors up to the top levels of mountains where you can view the panoramic meandering walls and towers. Here you can and climb further to various viewing stages. In most locations there are no cable cars and a strenuous climb is the only way to rise up to see the majestic views from the tops.