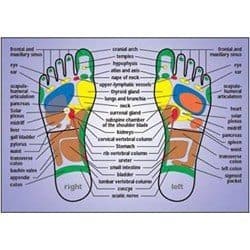 Recently in China I visited a foot massage parlour.

Here they give a free foot massage, but of course try to encourage you to have more treatments. But thatâ€™s no bad thing.

I had never before had such a massage and all I can say is that it was marvelous and energizing. Later this experience reminded me about Clinton Ober and his discovery related in his book: EARTHING. About the health effects of walking barefoot, and connecting to the earth. I noticed in Chinese cities that all paved areas have continuous stretch of nobly paving that are for blind persons to follow, but work equally well as a foot massage!

Whilst I was having my foot massage a Tibetan doctor came over and did some diagnostics on me; first he asked the foot masseur for some information, which he seemed to be very knowledgeable about. The doctor turned to me and all he did was star into my eyes, a little unnerving at first, then held my hand, inspected it, asked to see my tongue and asked my age.

Then after a thoughtful pause his diagnosis completed he told me this:

In your country and most of the western world your food, all of your food is not very good for your health. After years of eating this stuff, which is treated at many stages, in the animal with injections, and its feedstuffs, then the packaging, various long life shelf additives to many pre-pack meals, in fact most all of it, apart from natures own wrapped items like fresh fruit and vegetables.

Se suggested a herbal tablet treatment for my condition, which I could not ascertain as I felt OK. I said I bet youâ€™ll tell me not to drink beer; his reply was surprising, no no he said beer was very good for health.

He insisted I should buy the tablets prescribed, believed he was a very honest man and took his advice. He said I would notice an improvement half way or so on the three month course.

He was right about six weeks later I noticed a considerable improvement in my state of health, I was more vigorous in walking and breathing, I noticed that my mind was sharper too! I simply had a more general feeling of wellbeing.

What he had diagnosed was not health threatening; he told me that years of eating the supermarket food it had dulled my mental perceptions due to the fact that my kidneys and liver had become â€˜compactedâ€™ due to inefficient nutrients in the food, and had to become more flexible and that the treatment, followed by a better quality of food intake of fruit and vegetables, less meat, eat organically produced food and drink lots of tea.

In China the food is very fresh and you will never see an obese person. But I bet in a few years this will change as the younger Chinese continue their obsession with the Americanised culture of fast foodâ€¦.

There are no harmful chemicals to give unwanted side effects as these medicines are entirely natural. They may not suit or appeal to everyone, especially in the West, in China they are regarded highly, equal to many multinational pharmaceutical products; usual for none life threatening ailments.

Tongrentang Pharmacy Dazhalan Beijing is one of the most famous in business for over three centuries. Tongren comes from the I CHING and means harmonious and selfless – treating others equally.
Its a fantastic place to visit, just to look around. Well worth trying some remedies too!

Chinese herbal remedies are becoming popular in the West with many shops offering them alongside such things as acupuncture. So if you obtain a treatment in China you can probably follow up nearer home.

And its also easy to continue links online with Tongrentang.

The crazy European Commission is attempting to BAN many proven – for hundreds of years – herbal remedies.