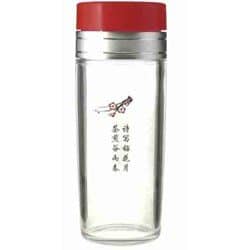 Tea is available in many forms and in many places in China.
There are tea shops and tea houses of varying levels of sophistication.
The range of teas is mind boggling and many teas are used for medicinal purposes, some you drink some are used for foot treatments!

Virtually all the outdoor workers from cleaners to police carry tea in portable bottles or flasks.

Once looked upon as not to cool by the younger generation, they are also getting into tea, many students carry unusual, and decorated tea flasks, some to keep tea warm others to keep it cool.
In China there is a huge array of containers for tea, even more than tea pots!

Young people are being targeted to consume more cool packaged tea. Itâ€™s a contest to switch them to tea from the American coffee locations that have become dominant and â€˜theâ€™ place to be seen drinking into the brand culture that is so effective in China as it embraces consumerism with both hands and feet!

Tea is part of the culture of ancient China; its historic, but has suffered as the younger generations have perceived this as not cool. I wonder if there was a new â€˜Americanâ€™ tea shop opening would that change back the perception? I bet it would as China’s younger population are very much into commercialism. For them to be seen in and doing the right things as portrayed in the media, to be rich and flamboyant is good: this means all that the west has to offer, mostly image. So the old ways of tradition have to some extent diminished in value, by young Chinese. However tea is making a comeback with the young trendy Chinese.

“Wore Sung Yow Cha” would you like some tea?

All The Tea In China

In Beijing a Chinese company is promoting Tea to the young as new and cool, using the tactics that USA promotions use.

And its not Liptons tea.

There is an ancient tea caravan trail in the South Western, and Autonomous Tibetan area of China. The rich verdant areas of Yunnan, Simao and Pu’er. The route splits to Vietnam, Laos, Burmah, the other through Dali, Lijiang and on to Lhasa, this route has been nicknamed the Shangri-La trail.Many tourists go to Lijiang as their first steps following the Tea Trail: Lijiang is a world heritage city.