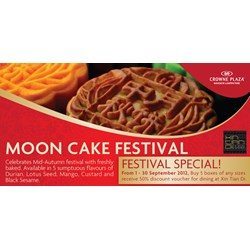 Chinese people; family, friends and business contacts exchange cakes in mid Autumn as a sign of friendship and people gather on the nightâ€™s of the 8th full moon to remember their family, and their home by eating these traditional cakes. Mooncakes are exchanged as a gift wishing the recipients a long and happy life. Considering the size of the Chinese population in China and the Chinese diaspora, this is a massive foodstuffs market worth billions.

The mid autumn festival falls on the day of the eighth full moon of the year (around mid to the end of September / sometimes the beginning of October. Itâ€™s all dependent upon the movement of the Moon orbiting the earth, a conjunction which changes dates each year. In the West the calendar has September as the ninth month of the year, but the traditional Chinese calendar follows an older order of celestial movements and dates. In the West around this time is the celebration of the Harvest festival; its the same thing. The Hare & the Toad according to legends live on the moon and children’s stories are told about them around this time.

So its the eight moon and the number 8 is a very lucky number for the Chinese, you will see car number plates, telephone numbers, house numbers etc that are all sort after due to containing 8â€™s. Many hotels number all floors prefixed with 8. The symbol of 8 is a very ancient one a symbol of connectivity, drawn as two connected circles indicating infinity.The numerology of 8 states that it represents: both material& Spiritual balance, manifestation, single-pointedness of mind, wholeness,
strength, power, success, self-discipline, achievement, abundance,
entrepreneurship, and leadership – So this festival is also thought to be a very lucky time. Only the Spring Festival is regarded a greater time of the year: celebrating the New Year.

Mooncakes were used to hide secret messages between Chinese leaders during the revolt against Mongol rule in the 14th century.

Mooncakes are made from a variety of ingredients with the most favoured being made from lard pastry with a filling of Lotus seed paste.

Leading up to this festival a great deal of advertising takes place. The outdoor billboards, the Metro stations, onboard trains and TV commercials all constantly inform about what are the best and most prestigious Mooncakes to give as gifts. Retailers, bakeries, hotels, restaurants, cafÃ©â€™s, department stores and shops all pitch for sales.

Mooncakes are often extravagantly gift wrapped in exquisite boxes and tins. The packaging is probably most of the cost of purchase! But then the presentation of gifts and their extravagance carries considerable cachet in china. The railway stations bus terminals and airports at this time, or leading up to it, are thronged with people carrying large Mooncake packaging, often more than one. At this and other festivals a long period of annual holidays are taken and the workforce in one city may head for another, or to the countryside; to visit their families. It has been reported that on one day in 2011 over nine million people were traveling on public transport in a single day!

Mooncakes are made now in many various types; some are sweet cakes, others are savory and with meat. The trade is huge, therefore it does suffer from counterfeit contents etc. There have been Mooncake scandals, so much money is involved, itâ€™s hardly surprising! Many countries ban the importation of Mooncakes and this causes great consternation and anger at many airports! Sending Mooncakes through the mail and especially oversees has caused problems too.

Even the foreign food and drinks market are providing Mooncakes!

From IMPRESSIONS of CHINA a series of articles about China ancient and modern, giving an insight into the emergence of China as a modern phenomenon of cultural change; as it becomes the worlds top economic superpower.