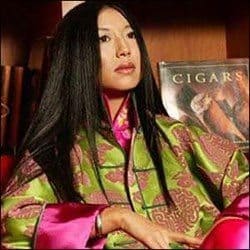 Yangerche Namu has become famous as the Chinese singer and author who proposed marriage to the President of France, Nicholas Sarkozy.

Yang is from the Chinese Himalayan Mosu region near Tibet and as an unknown singer after leaving Shanghai, she threw herself at the feet of the passing Tenth Panchen Lama in Beijing. Unlike the Dalai Lama the Panchen Lama stayed in Tibet. He eventually used his influence to get her a place at The National Minorities University.

She wrote about her upbringing and her people, and became a singer.

She is outspoken about her sex life as her culture is ruled by women, for whom it is natural to have lovers, but no husbands. Her people, the Mosu, live near Luga (the Mother) Lake in Yunnan Province.

She has written that her home town men smell bad and she criticise’s Chinese men in general.Thus she is established as a heroine for Chinese women. The Chinese men have a great many chauvinistic aspects, virtually all of them smoke, gamble and get drunk.

There are far more men in China than women due to the ‘one child policy’ and most are spoiled by their parents, often lazy. Girls work harder and tend to be better educated and learn English. So why would an educated middle class ‘westernized’ Chinese woman want a Chinese man?

These are the thoughts and verbalization’s of ‘Yang’ and multiple educated middle class Chinese women!

So with her outspoken and modern view, she has become a singer celebrity in China and due to her sexual attitudes has been nicknamed ‘The Tibetan Madonna’ it’s got more cache to it than the Yunnan Madonna!

With so many girls outnumbering the young males in China, there is a shift coming in cultural emphasis. This is also matched with the rise in China of consumerism and this can be seen in the City streets where the young gather in fashionable Pizza outlets and American fast food and drinks locations, which are very dominant!

There is little doubt that girls are on top.

Yang’s book is very prescient in its outlook!