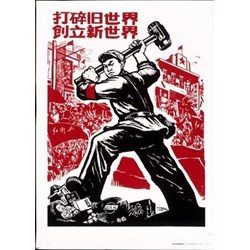 After Maoâ€™s revolution religious practices were at the very least frowned upon. In Tibet monasteries and temples were demolished and no religious rites were permitted.
Then in the mid 1960â€™s things went from bad to worse during the Red Guards â€˜cultural revolutionâ€™. The aim was to break the beliefs in what Mao described as â€˜poisonâ€™. He described Confucius as â€œa symbol of backward conservatismâ€. However the persistent beliefs and culture embedded into the Chinese people throughout centuries is either a habitual superstition, or something with underlying substance. It could not be erased; such beliefs were too ingrained and persistent and go way back in time. Thankfully more recently and under the guidance of Deng Xiaoping in the late 70â€™s things changed.

Known now as “the architect” of new socialist thinking; Deng although not the top leader in China at that time nudged China towards its current socialist market economy; which for all the world looks more like democratic consumerism. So it was that Deng Xiaoping was instrumental in opening China for foreign investment and trade, and introduced private led competition. The situation in both China and Tibet was also as far as religious matters were concerned more relaxed. Probably now seen as sensible as vast amounts of the population have reverence for Chinaâ€™s religious sites and temples. Also, a clever decision because such places are high value tourist locations: Tibetan culture has been restored. The temples of Beijing and all over China have also been restored and anyone can visit or worship at them.

The Religions of China

Chinese religions have a much more cerebral theme much to do with the discoveries about human nature, conditioning and good behaviour, that is emerging within modern psychology. Chinese religious belief looks like good advice and much of it in stark comparison with other more doctrinaire or faith based religions. Chinese religions encourage considerations regarding correct behaviour and a more direct relationship with nature, and directly with the ultimate rather than to much adherence upon the interpretations of priests, at least to some extent.
Confucianism is not a religion, but a philosophy and is much more about correct behavior, an ordered society and family values. Itâ€™s curious that Mao did not appreciate such things as they are probably the reason for the democratic socialist attitude of modern China, perhaps he would not be so keen on that also?
Daoism (Taoism) is attributed to Lao Zi, over five hundred years before Christianity. Confucianism advocates ethical actions. The Taoist stresses the virtue of Wu Wei (non-action): going with the flow of things. This also fits with Confucianism and in it can be seen why in China there is so much emphasis upon the Earth energies the Dragon lines, Feng Shui currents, the thoughtful passing over water (bridges) and the flow of natural things. Strands developed into alchemy and meditation techniques focused upon the belief of immortality
Buddhism came in under the Tang Dynasty (200 AD) and is the only foreign religion to become very dominant in China. Confucianism and Daoism are both ‘non-dualistic’ – matter and spirit formed a continuum: Ying & Yang like in alternate but harmonious connectivity, whereas Buddhism saw duality as separate as the cause of attachment and hence resulting in all suffering in the material world. Enlightenment and salvation being derived and achieved through correct living and meditation; accumulating grace.
Islam: Chinese Muslims are Sunni, with strands of influence by Sufi mystical teachings. Islam came to China in the Tang Dynasty period 750 AD. Its strongholds are along Chinaâ€™s border regions with other northern states, which are dominated by Islam. It teaches that there is one ultimate god who manifests our world without being within it and is interpreted by prophets such as Jesus and the last holy prophet Mohamed.
Christianity: was introduced by various missionaries in 700 AD from Persia and had some support from the Mongol rulers of China. Jesuits made a foothold in the 1500â€™s. Reintroduced particularly the British, thus connected with the imperialist forced ‘opening up’ of China, so was rejected as a foreign religion by the population. Today it is becoming more popular.
Shamanism semi-magical and superstitious beliefs are still around in the villages. Often these concepts creep into the more formal beliefs making a mix of all, linked with the spirits of locations and ancestors: essential going with the underlying belief in earth energies and meditative practices, and mindfulness of the ultimate etc: which some believe become one and the same thing. Examples being the reverence for mountains and sacred places. Temples built at such locations, rituals like the circumnavigation of mount Kailash in Tibet, the reverential respect for gardens, water and trees that can be perceived in China are all intertwined with multiple beliefs.

Temple visiting could be good for your health!

In modern China you can see evidence of, what some may class as superstition, others see veneration of ancient traditions, or simply religious respect:
In hotel entrances, restaurants, factories and offices, sometimes hidden or in full view you can see small areas of reverence. Some in full view others a little more discreet; incense burners, bowls, urns, statues etc. Outside virtually all buildings you will observe the entrance guardians: a dragon, a coiled snake, an elephant or a lion: these are always in pairs. The lions are masculine and feminine, the male lion has his foot on a globe representing power in the world, whilst, the femaleâ€™s paw is tickling a baby lion, showing the feminine qualities of caring, love and family.
For example the Quingming Festival (Tomb Sweeping Day) in April is when the relatives of the dead make offerings, burning gifts and fake money, as they believe that the departed relatives can assist those still struggling in current life.
In China without doubt, especially among the older generation there is a belief in the manifestation of the divine in nature and the natural world associated with primordial feminine and masculine energies.
It is said that the Qi (chi) is the life-force, the manifestation of the ultimate within matter; the underlying current that animates all the forms of the world; animal vegetable, mineral and of course human. It is believed that it has a vibratory nature a flow and a â€˜tremoringâ€™ continuously at the molecular, sub atomic level. It is said that certain initiates can perceive Qi directly at places on the earth, in nature and within certain structures and man made things, of arts and crafts, that it can coalesce and be stored within such things, and within certain people. In Japan it is called â€œki,â€ in India, â€œpranaâ€ â€œshakti.â€ To the ancient Egyptians it was â€œka,â€ the ancient Greeks â€œpneuma.â€ Native Americans now it as the â€œGreat Spiritâ€. To the Muslims it is â€œBarakaâ€.
With such beliefs it follows then that healthy energy is consumed by the body, nourished from the water, the air and through the intake of food. It should be obvious, that if it is not fresh, then its going to be less than healthy; many conditions of illness and fatigue are due to the wrongful in-gestation of bad energy.
Chinese medicine follows these things as does Acupuncture, foot massage and by reading physical conditions in the palm of the hand. Even the use of tea has curative properties. Food in China is fresh and healthy and free of the preservative â€“ Trans Fats and other food longevity chemical additions that inflict disease upon westerners; most obviously displayed in obesity (possibly related toAmerican Hamburger obsession).
Acupuncturists diagnose energetic imbalances, then they operate to re-establish the blockages to once again become a healthy free-flowing Qi, throughout the body. Itâ€™s similar with foot massage and essential in herbal medicine to rebalance the energy flow. The Chinese use these practices in health support for their Olympic athletes.
The Feng Shui (Wind-Water) practitioner perceives energetic imbalances within buildings, in nature and in objects then sets about moving the flows by using objects to increase or deflect the Qi.
So its no surprise that Earth energy locations or the belief in such things predominates in the locations of religious edifies and temples in China. Thatâ€™s why they were put there. It has also been established that as far away as England the same practices have been continued; with churches being located at places of more ancient veneration (pagan). So, bearing in mind the â€˜evidenceâ€™ above, then it may be assumed that visiting such places may be good for your health!

The main set of Temples in Beijing is located in a beautiful park: The Temple of Heaven Park. It is becoming a major tourist attraction and has always been a gathering place for the people at weekends. Mostly older people gather to exercise and to sing; maybe communal singing and performances are also passing on the flow of Qi? It could make you ponder about the hidden meanings behind the ancient performing arts.

Picture shows the Buddha in the pagoda at the top of the hill in JINGSHAN Park.