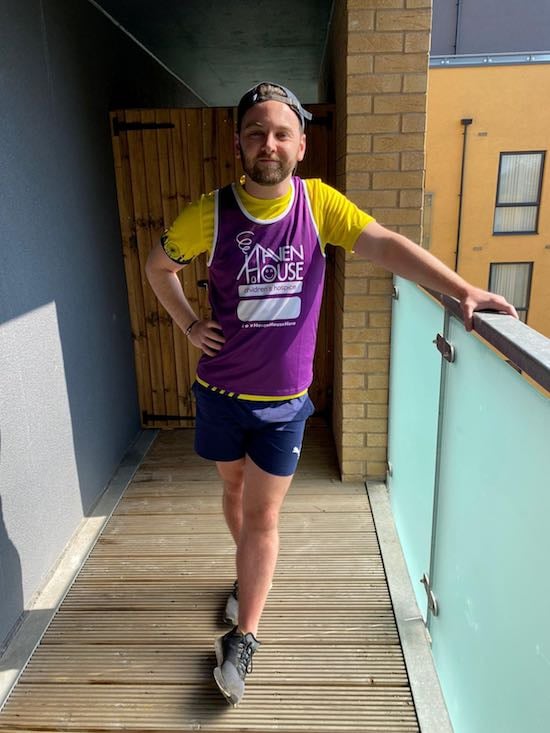 A determined English runner completed a half-marathon from his quarantined home earlier this week by running the length of his balcony 5,000 times.

Prior to the COVID-19 shutdowns, he had been training to run in the London Landmarks Half Marathon, which would have taken him past such sights as Big Ben, St. Paul’s Cathedral, and The Shard. Due to the government-imposed restrictions on public gatherings during the novel coronavirus outbreaks, the race was cancelled.

“It was going to be my first ever half-marathon and I was excited to do it, so it was devastating when it was cancelled,” said Hustler. “I had put so much training in and it’s such a great cause I am running for, that I still wanted to do it any way I could.”

WATCH: Love in the Time of Corona—NYC Man is Now Dating His Neighbor After He Creatively Woos Her in Quarantine

Organizers encouraged runners to get creative and identify their own local landmarks and map a run around hidden gems in their area on a solo run.

However, Hustler and his girlfriend Chloe Skerritt have been self-isolating since she developed a fever and a cough last week.

“We have been self-isolating since Monday. We’re fine, but it’s more of a precaution, really,” says Hustler. “We took the decision to work from home and not go out because my mum works for the NHS and my dad has health issues so we didn’t want to risk spreading anything to vulnerable people.

“I saw a video of a man in Italy who ran a full marathon on his balcony so I thought I could do a half-marathon on mine. I did a little 2-kilometer run on it on Tuesday and I thought ‘well it’s boring, but I can do it.’”

So with nothing but the views from his third floor apartment in South Woodford, Essex, Hustler completed the run in three hours with Skerritt cheering him on.

Hustler, an amateur cricket player Sam who had previously never ran more than 11 miles, said he had been training hard for the half-marathon and did not want that training to go to waste. He also wanted to honor his commitment to raising money for Haven House Children’s Hospice, a charity which supports children with life-threatening or life-limiting illnesses.

CHECK OUT: JOANN Stores are Handing Out Free Fabric Supplies at Curbside to Anyone Sewing Face Masks at Home

“I really wanted to do it for Haven House and raise as much money as possible,” says Hustler. “They’ve been going since 1990 and they’ve just put up an emergency appeal for funding. All their fundraising events have been cancelled and their charity shops have had to close, which was a major source of their income.

“They are an amazing charity that believes in the best possible life for every baby and child with a life-limited or life-threatening condition,” he added. “They do so much for families who live in my community and I’ve seen the work they have done, which is absolutely amazing.”