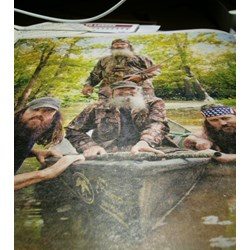 Meet who the Robertson Family Are

Robertson family there is Phil, 67 year’s of age, Jase, Willie, Si Robertson. The Robertson Family were born on the Bayou. Ask what goes on Beyond the scene of Duck Dynasty. Well first of, surprising as I was to believe they are Christians. The Robertson family was invited on the PTL Club on one set and share their story in how they became the Duck Dynasty and how they started the show. It is interesting to know the background of the people airs new television shows. I only watch the show once or twice and when it first aired on Television, my first expression was: “Wow, they are a bunch of hillbillies. When they appeared on the PTL club and shared their testimony I had a change of heart about them. At first I really I didn’t believe but than I got curious to know more about them. A lot of fans on face-book comments about them and it made me more curious to do research on the Robertson Family. Are they really the people who they say they are? I asked myself. Curious in how they became a reality show and how they started their reality show? The more and more I researched on the Robertson family, the more interesting I started wanting to know about them so I sit down and watch the show. Phil, who is 67 year’s of age -the hit reality show he starred on, along aside his extended funny family knows a lot about the rugged camo-clad out doors-mans and loves the adventures of proteins from frog legs to squirrels. Now I don’t believe many people requires the taste of eating frog legs or squirrels, at least not this person. Phil is a former star quarter back at Louisiana Tech University who actual turned down a pro tryout for the fear it would take him away from his hunting and his spunky wife of 49 year’s of marriage, Ms. Kay, their sons, and ambitious Willie, dry witted Jase and competitive Jep and whom works for the family business. Duck Commander, wives and kids; Phils odd younger brother Si who was a Vietnam vet who tells his full tall tales and mischief but offers his wisdom of the backwoods wisdom. When the Robertson appeared on the PTL Club they announced that they believe in the Lord Jesus Christ and pray before each meal and announce their Christianity. Listening to their testimony aired on National Television changed my expression about them Christians do come in all shapes and forms and different personalities and characters. I honestly say that my first expression seeing the Robertson family men with long beards and their appearances kind of how made me think they were just a bunch of Hill billies who lived back in the woods making mood shine. It is a good family program for all the family to watch and funny family reality show. After learning all I have learned about the family it helped me to change my thoughts in how I see them as. Phil actual hand crafts all of his duck calls in a one room old shed which stands just a few steps away from his front porch. He may never imagine that his American dream would one day make him famous and have his own television reality show. God does work in mysteries ways and provides and use people in ways people could even imagine. Robertson family prays together as a family and enjoys the life of nature and enjoys life. I now watch the show every opportunity I get and became another one of their fans. My husband did too. So don’t let those beards frighten you or judge them from their appearances or how they dress for they are just old down to earth country Christian Hillbillies that are appreciated and admire from many of their fans.