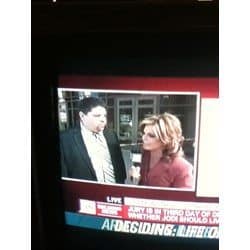 Public viewers eyes have been glued to the Television on the News. Listening and soak it all in waiting for the jury to come to a verdict, Arias deliberation to either choose the death penalty or life in prison. 7:30 P.m the verdict is in, the jury came to unanimous division. So the Judge set another date and what I heard to choose another jury. Expression on the family of Travis Alexander broke down in tears. I can only imagine the emotional turmoil this family is going through.<br /><br />During the time that Jodi Arias stood up in front of the Judge to give her little speech relating to trying to save her life, more she spoke, the more lies came out of her mouth. Yet she still denies that she murder Travis. In her statement to the Judge and the public, she mostly spoke about herself, I this, I did that but not once to the best of my knowledge did I noticed she did not say sorry to the family. My own personal opinion she still yet feel no remorse of the horror death of Travis Alexander. <br /><br />During her statement standing in front of the Judge and the public, Jodi Arias showed a white T-shirt with the words Survivor on it. She still proclaims she was a survivor of domestic abuse. I, speak for myself and share my own story of being a survivor of domestic abuse. I lived in fear, stressed in my life, had my nose broken and it still broken this day, I could not afford to get my nose fix. I owned nothing for had everything taken from me. For my sixteenth birthday, my father bought me a car, and my ex-husband demolished from the accident he was involved in. He was drinking and driving. I had to have my thyroid removed because he put his choke me and I passed out but my thyroid was utterly damaged were had to be removed. If Jodi was so claim she was a survivor of domestic abuse, she should walked in a domestic abuse survivor's shoes. Yet of all the beatings I took from my ex-husband, it didn't cross my mind to murder my ex. Only thought was in my life at that present time was fighting for my life where I could pack up and move far away and to start my life over. <br /><br />Jodi Arias did not have to go to that extreme to take a life in her own hands. My opinion, I can honestly say, Jodi Arias is not a domestic violence survivor, for it is the other way around, Travis Alexander was the domestic violence victim. So she deserves whatever she gets. You do a crime, you pay the time and I pray God has mercy on her soul. My prayers and thoughts goes out the Travis Alexander's family. Stay strong, God Bless the family. Let Travis Alexander to know, they are in many viewers prayers everywhere in other Nations. Our prayers are with you all.