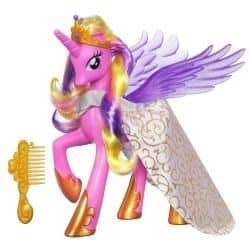 My Little Pony Princess Cadance figure makes an awesome Christmas gift for any fans of the show! I love it and it’s pink. I don’t exactly like pink but I have to say the toy looks attractive and fun.
More My Little Pony Toys HERE!

If you bought Princess Celestia figure before, this toy is about the same size as Princess Celestia but more cool. Why? Well it can say more phrases than Princess Celestia, comes with a beautiful dress and it has lighted up wings! Cool toy that your girl would love to have in the dark 🙂
Apart from Princess Cadance, Hasbro has released other My Little Pony toys such as the royal wedding playset and also Trixie Lunamoon, Lyra Heartstrings and Sunny Rays figures. They are all included below.

This toy is a must have for My Little Pony fans. This figure is more special than the rest of toy figures in My Little Pony series because it is bigger and sturdier. It is the same size as Princess Celestia figure which was released earlier. This figure can ‘talk’ (by pushing a button) and some of the things it can say includes “today’s my wedding day!”, “let’s dance”, and also hums some songs and even giggles! Please note that this toy includes a crown, dress and comb. The wings can be lighted up and also it requires two AAA batteries.

Another latest toy from My Little Pony – a wedding playset. Have you watch the commercial? It’s stunning (see video below). This makes a great gift for little girls that love all things related to castle and fairytales.

Hasbro has announced that it will release several new toys from My Little Pony which includes Princess Twilight Sparkle figure that is battery operated. Cute plush toys are among those new toys too. You can check this new toy on the video featured below. So far this toy is not available for sale yet but I will keep this page updated if I have more news about it.

The Croods Toys, Action Figures, Dolls, Plush
DreamWorks Animation has signed a deal with US toy maker, Mattel to produce a range of the Croods toys for the upcoming animation movie, The Croods. This mov…

Funko POP Marvel 2013
Good news for fans of Marvel characters. In December 2012 Funko has announced that it will release a new line of Marvel vinyl figures in 2013. The first two …