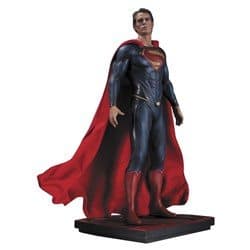 Where to Buy Man of Steel Toys?

Are you a fan of Superman? Guess what there will be a new Superman movie this year – Man of Steel. Henry Cavill will star in the title role. This movie is scheduled to be released as a summer blockbuster this year.
I can foresee that this movie is going to be huge and lots of merchandise will be available for sale including, of course, Man of Steel toys and action figures. In fact I noticed that the action figures are already available for pre-order on Amazon.
There are also two cute Funko POP and Head Wobbler figures available for pre-order and these items will be shipped to you on the first week of May.
Image credit: DC Collectibles Man of Steel Superman Iconic Statue, Scale 1/6

One thing I noticed that make this toy differs from the earlier Superman action figures is the suit. The red ‘underwear’ is gone but he retained the original blue costume with red flowing cape. Also the suit have some sort of texture on it unlike the smooth suit found on earlier action figures. The toy looks like Henry Cavill and I think his fans will be happy to receive this toy as Christmas gift (*hint* :).
As mentioned, this action figure is available for pre-order on Amazon and it will be shipped to you end of May 2013.

I love Funko POP toys! They always produced cute action figures including the latest one, Psi the singer of Gangnam Style. These pint size figures are suitable for your office desk decor or any shelf at home. I think we will see other Man of Steel characters available from this toy maker but so far we only see Superman and General Zod. See below.