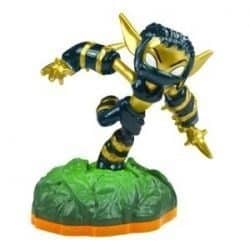 One of my favorite Skylanders variants released with each new game are the Legendary figures. These sensational Skylanders Giants Toys R Us exclusives sport a really cool, dark colored paint scheme and feature increased powers and abilities; making for a really fun gaming experience.

Unlike the normal Skylanders Giants figures that you can find at any stores, there are a number of characters that can only be found at Toys R Us.

Skylanders Giants Legendary Three Pack
This legendary triple pack is pure awesomeness. Featuring such powerful Skylanders as Ignitor, Slam Bam, and Jet-Vec, this three pack certainly packs quite a powerful punch.
Each of these Toys R Us exclusive chase figures is fully decked out in a deep, dark lack color which is accented nicely by rich, golden yellow accents.

Skylanders Giants Legendary Bouncer
Bouncer was, at one time, an amazing baller…until he loved ones were attacked that is. Now he serves well as a member of the Skylanders keeping people safe and doing himself proud.
Despite being one of the first figures released from the Giants game, this big guy remains one of the more popular characters.

Skylanders Giants Legendary Lightcore Chill
If your kids are anything like mine, then they were super pumped to discover a legendary figure was also available as a lightcore figure.
There is, after all, something pretty cool about seeing this sensational figure light up; particularly since the color scheme is so cool to begin with!

Skylanders Giants Legendary Stealth Elf
When Skylanders Giants was first announced, Stealth Elf was the poster child for the game. She was literally one every single piece of promotion material available.
With that being said, her popularity has remained at an all time high. I would have thought that, over time, her collectibility would have decreased…..Fortunately, I was completely wrong!