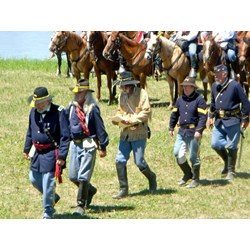 If wanting to do something different for the family for a summer trip, a truly amazing and educational adventure can be found at the Little Bighorn Battlefield, where a reenactment of the battle is performed each year. The reenactment usually takes place in the month of June on the weekend close to the anniversary date of the historical battle.

The Battle of The Little Bighorn was a conflict which took place on June 25-26, 1876, along the Bighorn River in what is now eastern Montana, between the 7th Calvary of the United States Army, and members from the Lakota, Sioux, Northern Cheyenne, and Arapahoe tribes. The reason for the battle was for the cavalry to move the Indians to the reservation, which they resisted by choosing to occupy the land. Although the number of participants vary, there were approximately 268 troopers against approximately 2500 warriors who participated in the skirmish.

This historic battle still holds interest for many historians and enthusiasts alike. Every year close to the anniversary of the battle, the growing amount of spectators witness the reenactment, which is performed on much of the area of the actual battle site. People travel from all over the world to take part in recreating the battle. This is a great event for anyone wanting to learn more about the history of The Battle of the Little Bighorn

Other attractions are The Custer Battlefield Museum,The Indian Memorial, and the National Cemetary, and The Little Bighorn National Monument, which is managed by the National Park Service. For reading enthusiasts, there is also a bookstore. These can be great learning experiences for the whole family.

The location of this battlefield is between Garryowen, Montana and Crow Agency, Montana. If planning to visit this battlefield, there are several websites filled with information about The Battle of the Little Bighorn. Three websites that I have found to be helpful are:

There are also hundreds of books about The Battle of the Little Bighorn or, related topics such as Custer’s Last Stand.