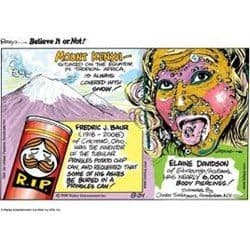 Half Man, Half Woman?

Sounds like the description of a side show act at the circus. It very well could be, in the end. We will let you decide later. I’m talking about men and women in general. We are led to believe by society that there is someone for everyone. I believe it. Don’t you? I believe that most of us believe that we should get married at least once. It’s sort of like the ticking baby-clock for women. Don’t want to get too old. It will be too late. I will be set in my ways, and on, and on. I’m not going to say for sure, but I think the Bible leads us to believe that we are not whole until we’ve found a mate. It says so in the marriage vows. The union of these two people. Together they are one, or something of that nature ( I was high on life at my wedding, so I’m not quite sure what was said-I know I said ‘I do’ ). Now exactly what does that mean? If we don’t ever find a mate, will we be half a person? That’s what it sounds like to me. Think about it. When people ask where my wife is, either I refer to her as my other half, or my better half, or they refer to her in that manner. So, if she’s my other half, that means, by myself, I am half. Wow! Well, I’m married now. I guess that makes me whole. But what about the poor souls who are still single? And what about the ones who are not only single, but are pushing 50 years of age or more, are probably set in their ways ( which decreases their chances of finding a mate ), and have no kids? That’s mind-boggling. For those poor souls, the clock is definitely ticking, loudly. Doesn’t having a girlfriend or boyfriend count? Half man, half woman. Single folks, you’d better get yourselves together, literally, before it’s too late. Tick, tick, tick. Can you hear the clock ticking? Believe it, or not. But that’s just my opinion. What’s yours?

Get Your Mojo Back!