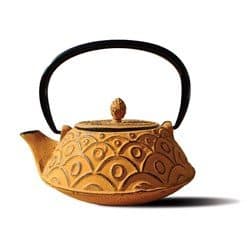 Cast Iron Teapots, known as Tetsubin, originated in Asia – cast iron distributes heat more evenly and the water will stay hot for longer. Teapots made of cast iron will last a lifetime if cared for correctly. Plus, they look so attractive in a kitchen, they’re a work of art in themselves!

Cast iron keeps tea at the proper serving temperature for up to an hour. The porcelain enamel interiors keep the taste of the tea pure. Infuser included.

How to Care for Cast Iron Teapots

Do not use dish washing liquid – use hot water only

Each Cast Iron Tetsubin teapot is hand-cast, as well as hand-finished, and fitted with a removable stainless steel mesh infuser basket.