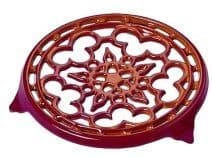 Cast Iron Trivets – What Are They?

Trivets are small flat surfaces for keeping hot pans and pots off countertops and tables. They may be made from steel, wood, ceramics, tiles or any material which can withstand heat. Historically, this means Cast Iron Trivets are some of the most common available.

The word ‘Trivet’ originates from ‘trevet,’ a Middle English word which means a ‘cooking vessel,’ plus the Old English Word ‘trefet,’ meaning ‘three-footed.’ This is because trivets were originally designed as a method for keeping pots and kettles above an open fire, ensuring food cooked at lower temperatures.

What is Cast Iron?

Cast iron is formed by re-melting a combination of pig iron plus scrapped iron and steel, then removing contaminants; this is then heated in a furnace. The resulting molten iron is cast into a mold to form whatever form is required. Cast iron is resistant to wear and rust, making it a durable material for extended use.

This attractive cast iron trivet let you serve a pot of hot tea without worrying about damaging your table. It is traditionally designed for holding hot cast iron tetsubin teapot. Cast ironware is praised worldwide for their beauty, strength and superb quality.

Iron trivets may have a mark on the underside of the trivet. The round Sprue and the rectangular Wedge marks were used before 1865. A rectangular Gate mark along the rim indicates castings where more than one trivet was cast in one mold pour. These are typical of castings predating 1895. Give a thought to the displaying of your collection – will you display your collection on stands or by hanging? Will you collect your trivets according to their age, by their purpose or just collect the designs you like?

This trivet is made from solid cast iron, the perfect material for hot plates as used for centuries.