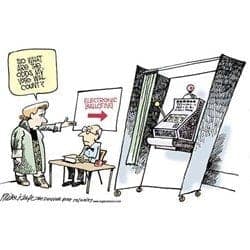 Of all the races and referendum questions on the Nov. 6 election ballot, Proposal 2 on collective bargaining rights poses the biggest danger to Michiganâ€™s economic comeback, Gov. Rick Snyder said today in a telephone interview from New York, where he met with bond rating agencies Thursday.

He said the agencies â€” Moodyâ€™s, Standard & Poor’s and Fitch â€” expressed concern over a number of the ballot proposals in Michigan.

â€œProposal 2,â€ Snyder said, â€œwould be, by far, the most devastating to the reinvention of Michigan. Weâ€™re making a lot of tremendous progress, weâ€™re the comeback state, and that would be a giant step backward in time,â€ he said of Proposal 2, which would curb the governor and Legislatureâ€™s authority to impose employment conditions, such as public employee copays on health insurance premiums, and bar future enactment of a right-to-work law in Michigan.

â€œIt would really do very detrimental things to the continuing economic recovery of Michigan and to the stateâ€™s financial situation,â€ Snyder said. The negative impact on that state could be â€œin excess of $1 billion a yearâ€ from Proposal 2, he said.

Let’s take a closer look at the proposal.

Proposal 2: A proposal to amend the state constitution regarding
collective bargaining

1) Grant public and private employees the constitutional right to organize and bargain collectively through labor unions.

2) Invalidate existing or future state or local laws that limit the ability to join unions and bargain collectively, and to negotiate and enforce collective bargaining agreements, including employeesâ€™ financial support of their labor unions. Laws may be enacted to prohibit public employees from striking.

3) Override state laws that regulate hours and conditions of employment to the extent that those laws conflict with collective bargaining agreements.

4) Define “employer” as a person or entity employing one or more
employees.

Whoâ€™s for it: Unions and worker advocacy groups

Whoâ€™s against it: Business interests, including the Michigan Chamber of Commerce, and Gov. Rick Snyder

Pros: Supporters say it would ensure Michigan workers are treated fairly; protect the middle class from loss of wages, benefits and good working conditions; and prevent Michigan from becoming a right-to-work state.

Cons: Opponents say it would make Michigan the only state with a constitutional guarantee of collective bargaining rights, overturn decades of labor laws and restrict the Legislatureâ€™s authority over labor matters.

Just looking at who’s backing what tells you just what is at stake. The folks for passage of the proposal are arguing over the right to bargain over wages, benefits, and a safer working environment ( who doesn’t want that ). And the folks against passage want a right-to-work environment, where a worker can’t bargain for better wages, benefits, and a safer working environment. I don’t know about you, but even workers down south are now getting more involved in union activities. So what that tells me is that they, too, are getting tired of being ‘run over’ by the corporations wages-wise, benefits-wise, and safety-wise. I’ve got plenty of friends and family who live down there, and they’ve expressed these concerns with me over the years. So no, I am all for Proposal 2 passing. Right to work. Please. Right for the corporation to pay you peanuts for doing multitasking ( 2 or 3 jobs ), and in most instances, with total disregard for a worker’s safety ( as long as you get the job done, cause if you don’t, you WILL BE REPLACED ). I don’t think so. And me and my union-card carrying brothers and sisters will be all out on election day voting ‘yes’ on 2. But that’s just my thoughts. What’s yours?