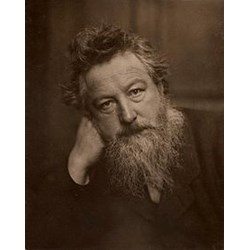 There are many artists that I could name that you would know their work.  Such famous artists as Picasso and Van Gogh, you will know, without questions.  Not only would you know their face, but you’d probably also know their artwork.  Such is probably not the case with William Morris, yet you’ve probably run into contact with his work without knowing it.

Mr. Morris was known as a poet, social activist and artist. In fact, if I mentioned Socialist League and the manifesto he wrote, you’d probably be more likely to recognize him.  At least if you’re one of those that’s into history and all that comes with it.  He was considered to be a powerhouse in on the political scene.

Having said all of that, would you be surprised to learn that he is the creator and designer of the Snake-head style of tile and art?  You probably have seen it on clothes, tile, wall design and the like and not realized it.

William Morris was more than an artist...
he changed a nation.

After looking at the artwork shown here, does that ring any bells?  Probably, the artwork type is called Snake-head, and it was originated by William Morris.  If you do a Google search on him, you’ll find that you can get all types of wallpaper, tile and even belts with his impressions, his designs on them.

You can get his work in any number of ways as I mentioned, but you can also get it in such a format that you yourself can do William Morris work and have them hanging and displayed in your home.  One of the ways that you can do this is in of needlepoint.  One of the things that I like about being in to needlepoint, comes in the form of being able to do some of the greatest artist myself.  I then can have not only a part of history but a part of art, and I truly had a hand in it.

Is it hard?  No.  It’s easier in most cases then sewing and it’s something that you can do right out of the kit.  Which brings us to the next question that only you can answer; why not give it a try?

Yes, you are able to have William Morris in your hands...
done by your hands.