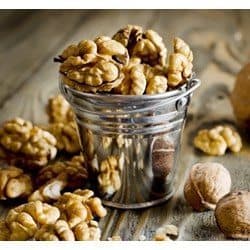 Walnuts we consume as nuts are
basically the stone of the inedible fruit of the Juglans Regia tree, which goes
by names such as common walnut, Persian walnut and English walnut. The tree is
thought to have originated out of somewhere in present Iran and hence its name “Persian”.
Since ancient times, it has been cultiveted for the delicious and nutritious
seed and it has spread to all corners of the world where climate is mild and
resembles its homeland. Iran continues to be a major producer followed by USA
with California being the top producer state. Yet, the country that enjoys the
largest walnut harvest every year is China.

Walnuts have a tasty, creamy and
nutty texture and taste and are loved by any who tries them. They can be eaten
raw, which is the most common and most healthy way to consume them and they are
also included in many desserts and dishes. Consisting of more than 60 percent fat
by weight, walnuts have the greatest fat content of all nuts and that also
makes them the most delicious. Despite the high fat content walnuts, when
consumed in moderation can have weight reducing effects thanks to their satiating
nature and the fact that a considerable part of the fat they contain is
actually essential fatty acids that have several health benefits. To better
explain what I mean, I will attempt to assess whether walnuts are a good source
of the essential fatty acids that we know as Omega-3.

The health benefits of omega-3
will not be discussed here but suffice to say that it is closely linked to a
healthy brain and heart and that most people are not getting enough of it. So,
it is important to find good sources of omega-3. Walnuts contain 7 to 9 percent
of omega-3 fatty acids by weight and that is huge concerning that fish, touted
as the best omega-3 source, contain on average 1 percent omega-3 by weight and
that is when raw. A handful of walnuts should give you more than your daily
requirement of omega-3. Everything looks perfect until this point. However, there
are also some disadvantages of walnuts when it comes to being an omega-3 source
and we need consider those.

The first disadvantage of getting
your omega-3 from walnuts is that the type of omega-3 found in walnuts in Alpha-linolenic
acid (ALA) while the type of omega-3 your brain needs is docosahexaenoic acid
(DHA). DHA molecule is basically nothing more than an ALA molecule with a few
extra atoms. Human body is capable of doing the conversion from ALA from DHA.
However, the endless tomes of research on omega-3 tell us that experts are
arguing on whether ALA is as good as DHA for your body. The main anti-ALA
argument is that the conversion is rather inefficient and your body has to use
a lot of ALA to make a little DHA. As expected, pro-ALA experts will tell you
the rate of conversion is good enough and you can get all your omega-3 in ALA
form and end up perfectly healthy. Honestly, I am not expecting to get a clear
answer to this question in near future because I believe there is more to this
issue than we actually see such as the involvement of supplement companies and
the like. For the present, I can only advise to get your omega-3 from different
sources that includes ALA from walnuts and DHA from fish. And this is not the
only disadvantage of walnuts.

Walnuts contain about four times
as much omega-6 than omega-3. Omega-6 is another essential fatty acid you need
but it is found in such high concentration in virtually everything you eat that
everyone on this planet who is not starving is getting omega-6 than he needs. The
bad news is too much omega-6 is thought to slash the benefits of omega-3 you
get because both types of essential fatty acids bind to the same receptor
molecules in your cells. So, when there is too much omega-6 around, omega-3 can
not get involved in the whatever cellular reaction it must and you get no benefit.
The ideal omega 3-6 ratio is 1:1 but we are getting on average 1:20. Some even
go so far as to say that walnuts are not good because they have too much
omega-6. This is an overstatement. The omega ratio of walnuts is 1:4 and that
should make a positive effect on your overall omega 3-6 ratio, which probably
hovers around 1:20. You only need some basic maths to see that. Besides, if you
can actually hit a 1:4 ratio in your overall diet you will be getting lots of
benefits according to research.

What does Research Say?

If you can concentrate well,
think clearly, remember stuff and learn quickly, it is a good indication that
you are getting your omega-3. Well, if walnuts are a good source of omega-3,
eating wallnuts should have a positive effect on cognitive function and we do
have significant research results that show us that eating walnuts does improve
cognitive function. So, at the end of the day, we are able to say walnuts are
useful for getting your daily omega-3 and you should actually be eating a
handful a day, having also mentioned the possible disadvantages.