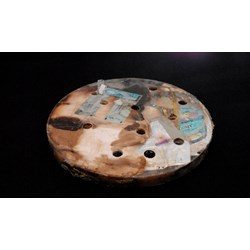 What we do with the garbage produced in space? Build spaceship!

Plates, round, are obtained by smelting and pressing of waste materials from all kinds of goods used during space missions: plastic bottles, tape, synthetic fabrics, packaging foil etc. After melting and compaction, all the garbage produced in a day aboard the International Space Station is reduced to a disc with a diameter of 20 cm and approx. 1.5 cm thick.

According to Mary Hummerick, microbiologist working on this project, one of the uses of these discs could be that the components of the coating designed to protect the crew against cosmic radiation. Other possible uses include: lining berth astronaut or a portion where they take shelter in case of solar storms.

For now, researchers are trying to determine whether the plates obtained by this method are sterile (free of microorganisms) or at least safe enough to allow daily contact with them without danger to astronauts.

Also, researchers are interested to know if the plates (which are kept in conditions similar to those on SSI) allow growth of fungi and other microorganisms on their surface if left in an atmosphere like that which would exist in a spaceship .

Waste management is an important issue for everyone involved in space missions, for several reasons.

First of all, nobody wants a tight space and so come to be crowded with debris. Second, opportunities will be very limited for a crew forced to live about 2 years on a ship, as would happen if a Mars exploration missions.

Astronauts can not throw, just outside the ship’s garbage because it could reach another celestial body, contaminating it. NASA rules require astronauts to avoid contamination of other objects in space.

Another important goal is the recovery process of compacting waste water so that it can be reused crew. Water is very difficult to transport into space in large quantities is difficult, therefore, an efficient recycling them is essential for successful long-term missions.

Extracting as much water as waste, the melting / compacting their water supplies helps restore the ship, but also has another advantage: plates thus obtained will have a very low water content, making it less likely colonization them by microorganisms.