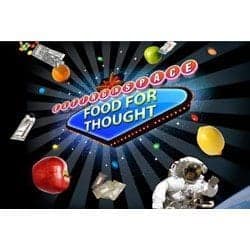 Guide to Space Food is an effort (more than an article) to make space food more than NASA’s “astronaut ice cream” — which is simply freeze dried cream and, like most NASA food, completely inedible.  The horror stories of astronauts vomiting and clogging air filters aboard spacecraft are legendary.  This is why people are always asking: “How do you use the bathroom up there?”   People know that NASA food will send them swiftly to the restroom for relief.
The French have a better way.  They have put thought into making space food as good as Earth food and perhaps even better.  Space offers opportunities for chefs to do molecular gastronomy, culinary physics, and experimental cuisine.  Who will build the first restaurant in orbit?  Who will build the first restaurant on the moon? Who will build the first restaurant on Mars?  Hopefully it will not be a fast food joint or greasy spoon like in TV’s Martian Chronicles.

These are astronauts playing with their food instead of eating it.  On Earth, this stuff is known as fast food.

This is a publication from NASA intended for teachers.

Cosmonauts and astronauts are forced to eat from toothpaste tubes.

The “nutritionists” at NASA are apparently unaware that the contents of a barf bag and their “space food” look disturbingly alike.  Better to suck on an IV bag from a hospital because you are going to end up in an E.R. getting your stomach pumped.

There has to be a better way.
There is. It is called space restaurants, space green grocers, space bakeries, space dairies, space farms, and space homes where you can prepare your own meals from fresh ingredients instead of junk food wrapped in plastic.