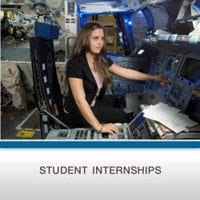 Guide to Space Education is about learning who’s who in the space industry, what’s what in the universe (astronomy), the history of the Space Age, where are places in relation to other places in the universe (space geography), why we humans instinctively have the need to go to space, and how we will get there (astronautics).
I will be adding new modules on space executives, basic astronomy 101, space history 101, space geography 101, space psychology 101, and astronautics 101 in the coming months.  So mark your calendar.
Toni Roman
regent
Galaxial Polytechnic
(feel free to contribute to Endowment Fund)

There are internships at NASA but they do not prepare you for anything but working at NASA.  They do not prepare you for the realities of the profit-driven world of the space industry.  Also, NASA programs are always facing budget cuts due to the shifting political winds every four years with the change of party controlling the White House and sometimes every two years with Congressional elections.  NASA is what political scientists call pork barrel.  On the bright side, the unmanned program has some of the brightest minds in planetary science.
Challenger Center and the Christa McAuliffe Center are for the kiddies and not serious post-graduate study.

Space education centers are far from rare.  What  IS  rare is good centers for civilians at the graduate level.  The Moorman Space Education and Training Center, for example, is on Schriever Air Force Base and cannot help the student aware of space law who knows that it is illegal to militarize space.
Lesson Number One — Treaties, international law and the incessant blather about the desire for world peace will not stop idiots from blowing everything up in space and killing everyone. Remember that scene in Star Wars where they committed genocide and turned a whole planet full of billions of people into an asteroid belt?  That could be Earth. Probably will be unless we stop the warmongers.  Who are the warmongers? Not the military.  They just follow orders.  The warmongers are the lunatics in the legislative branch who appropriate our tax dollars for such lunacy and the lunatics in the executive branch who break the law and order the militarization of space.  We know history.  We know wars only seem to get bigger.  Simple logic tells the few amongst us who are sane to stop it.
Two of the best space education centers are the University of North Dakota and the International Space University.  They are designed for civilians who will find employment in space industry.